Smiling at the cute cashier, batting your eyes at your work-crush, or even strutting up to greet an attractive stranger at the bar, whether Dr. Love himself, or merely an average joe looking to land a date, we’re all aware of the tried-and-true signs of flirting. It’s with this familiarity in mind, that the recent emergence of social media and popular dating apps have revolutionized these age-old flirting techniques, reimagining themselves in the form of risqué DM’s and overly animated texts featuring the all too infamous winky face emoji. Biological sex has long stood as the primary element of influence within flirting behavior, but with the prevalence of today’s digital technology, the actual medium of such communication has been introduced as yet another important factor regarding one’s approach to flirting. Despite this being the case, a few features of flirting remain ubiquitous across both face-to-face and virtual mediums regardless of biological sex: the use of compliments and exaggerated reactions. With this in mind, the following article lays-out and reflects on the aforementioned features of flirting, shedding light on how differences among sex and medium impact flirting behavior, perception, and tendencies.

Before diving into all the nitty-gritty details of these recent observations, it is important that we introduce the background of such research, and more specifically, the features of flirting we will be paying special attention to. With longstanding studies on flirting and communication, it doesn’t take an astrophysicist to know that flirting relies heavily on non-verbal signals and exaggerated reactions such as laughing, smiling, looking someone in the eye for a significant period, and winking (Eckert & McConnell, 2003). For this exact reason, more contemporary research has concluded that without the traditional non-verbal signals of face-to-face communication, virtual flirting tends to rely on emojis, capitalization, and punctuation, as substitutes for conveying exaggerated excitement (Whitty, 2004). Our study of “exaggerated reactions” refers to the act of responding over-enthusiastically while flirting, usually laughing, smiling, or speaking louder and faster to signal interest and excitement. More specifically, this feature may take form in face-to-face contexts by giggling at an attractive person’s joke as if it’s way funnier than it actually is, or appear in a virtual sense, with the excessive use of emojis, punctuation, and capitalization, while texting “HAHAHA…waaaaiitt, I LOOOOVE that!!!!” Likewise, in regard to modern analysis surrounding the use of compliments between men and women, it’s been widely observed that women are more likely to both give out and accept compliments, while men are more likely to deflect and misread compliments when flirting (Tannen, 1990). From this standpoint, we’ve chosen to further examine such behavior, particularly researching what we’ve classified as “direct and risque compliments.” This feature refers to the act of essentially cutting straight to the point and making a flirtatious or sexually suggestive compliment while flirting. Most notably, such behavior may be observed within the likes of face-to-face flirting by telling someone “you’re gorgeous,” or appear in a virtual context while sliding into someone’s DM’s to say “you’re super hot, can I get your snap?” Now at this point, you may be thinking so what’s the big deal? Well, by taking these features into account, we’ve developed exciting new insight on the medium and types of compliments preferred by men and women, in addition to which medium is perceived to involve more exaggerated reactions, as well as direct and risqué compliments. We predict that flirting face-to-face is the preferred medium of both men and women, being perceived as more sincere, and therefore, more effective. Moreover, we also expect to find that flirting virtually tends to involve more direct and risqué compliments, as well as exaggerated reactions.

With regards to the methodology of such research, we decided to approach this study with three separate phases and means of collecting data. First and foremost, we developed a multiple choice google survey, gathering responses from 27 male and 27 female UCLA students. In particular, this survey gauged the tendencies and perceptions, as well as the use of compliments and exaggerated responses by men and women when flirting face-to-face and/or virtually. Next, we cross compared our survey results with 14 anonymously submitted screenshots of flirting over Tinder, Instagram DM’s, and Text messages, effectively countering the potential survey bias of our data by presenting more “real-world” flirting behavior in practice. Lastly, we gathered and analyzed an assortment of media clips containing flirting scenes from various movies and shows, once again cross referencing such examples with our survey data and screenshots of virtual flirting to develop more comprehensive results.

Moving on to the results and analysis of this three-phase approach to data collection, we see that our survey results indicate that men and women are strikingly similar when it comes to their perception and use of really any notable feature and medium of flirting. In this case, our survey data shows that the only notable disparity between sex appears over which medium is more likely to contain exaggerated reactions, with men saying that virtual flirting contains more exaggerated reactions, while women reported the contrary, highlighting the exaggerated reactions of face-to-face flirting instead (as seen in Graph #5). Beyond this minor disagreement, both men and women said that face-to-face was their preferred flirting medium (Graph #1), agreeing that it’s more sincere (Graph #2), and therefore, more effective (Graph #3), while also perceiving that virtual flirting tends to involve far more direct and risqué compliments (Graph #4). 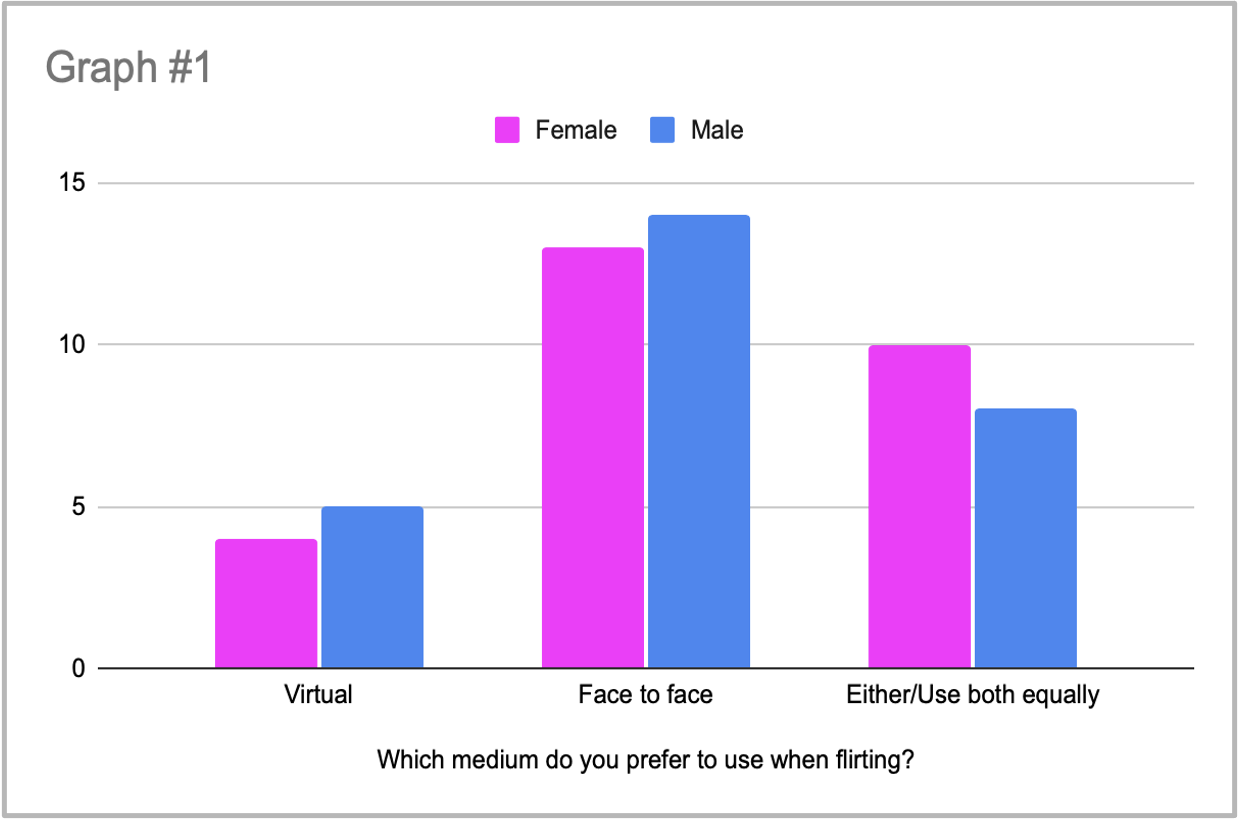 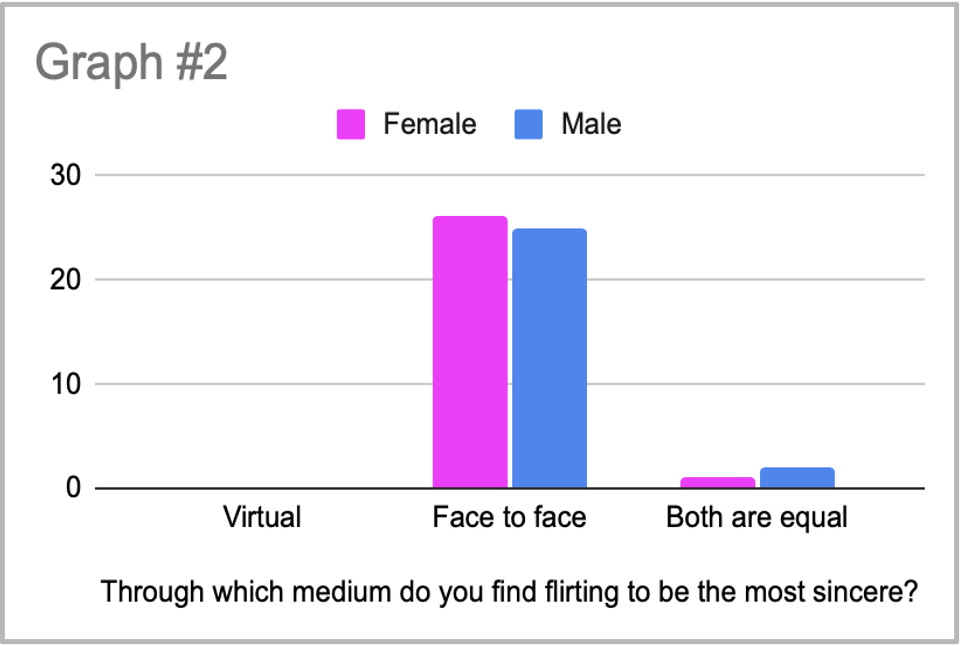 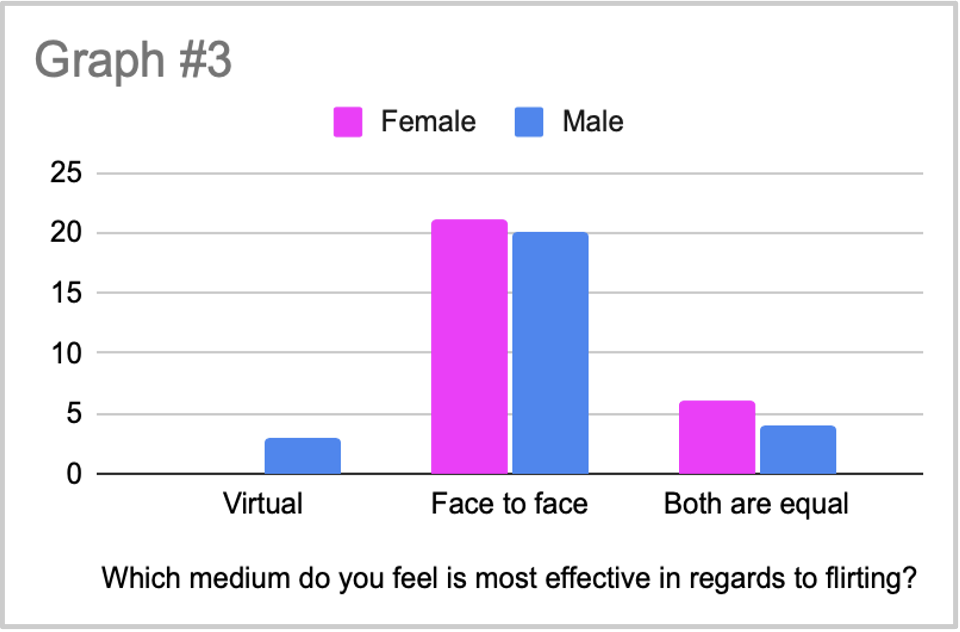 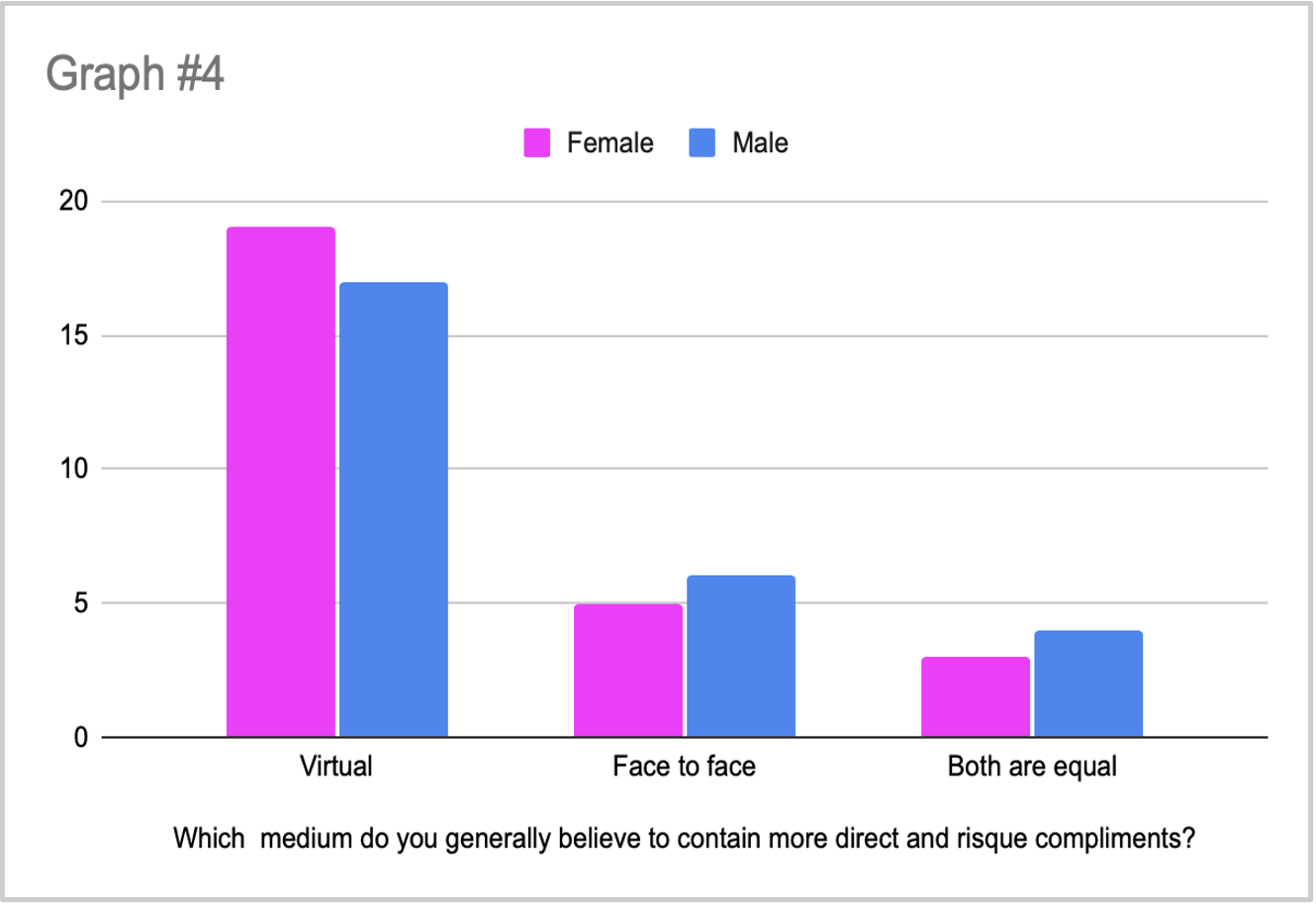 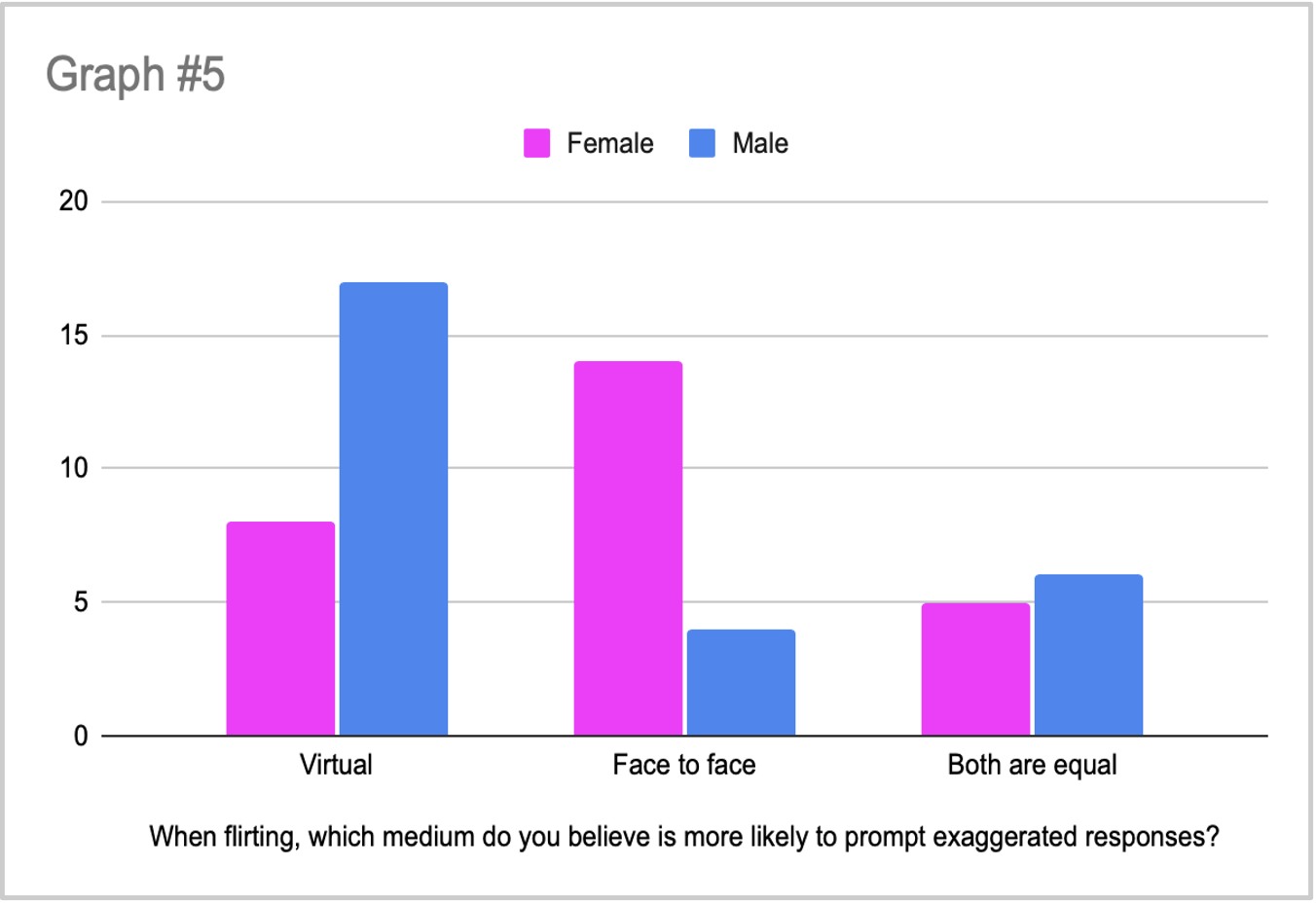 Taking this into account, our analysis of the virtual flirting screenshots showed that in many cases people will say things online that they may not say in person (Screenshot #1 and #2). This observation carries over similarly to an apparently high volume of exaggerated messages and responses (Screenshot #2 and #3). As noted earlier, this behavior likely stands as a means of compensating for the lack of traditional nonverbal flirting signals missing from virtual mediums. Lastly, our examination of media clips focused mainly on scenes from the films “Back to the Future”, “Crazy, Stupid, Love”, and “The Departed” (see links below).

“Back to the Future” Flirting Scene

In each case, all three clips displayed an exchange of compliments, usually coming from the man initially, as well as indications of exaggerated reactions, usually occurring in the form of giddy laughter, smiling, and louder, faster speech. 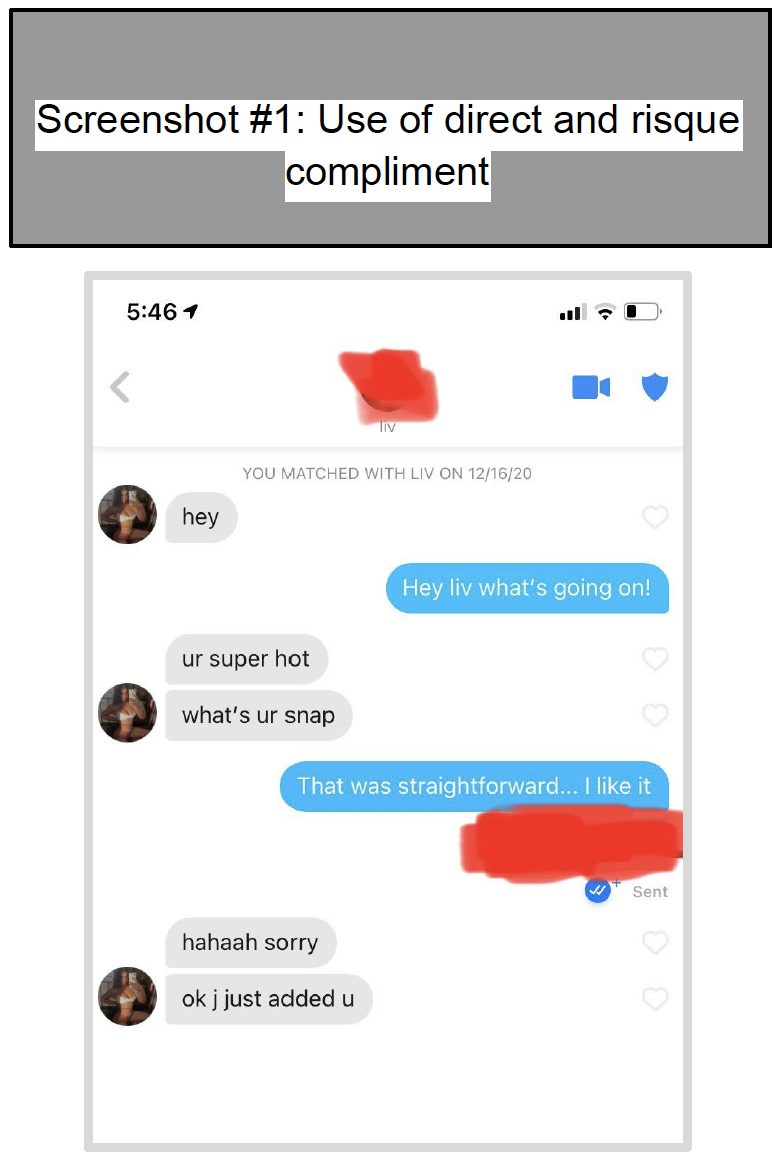 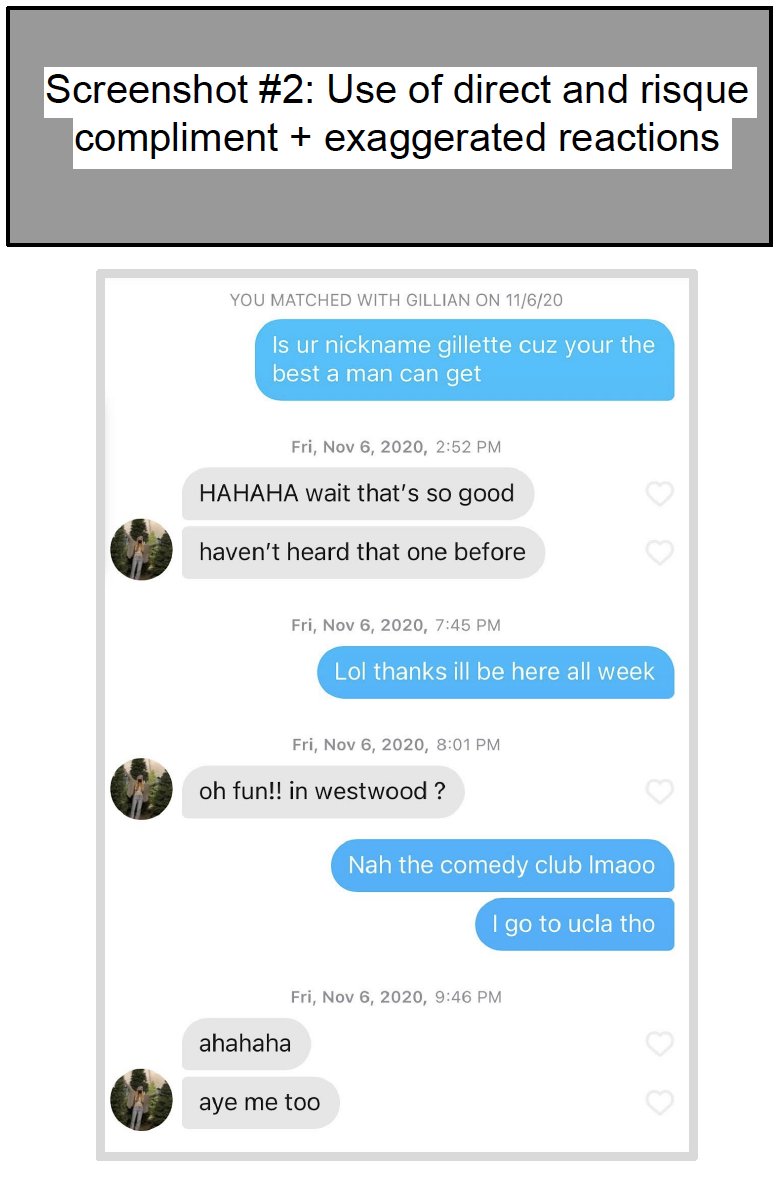 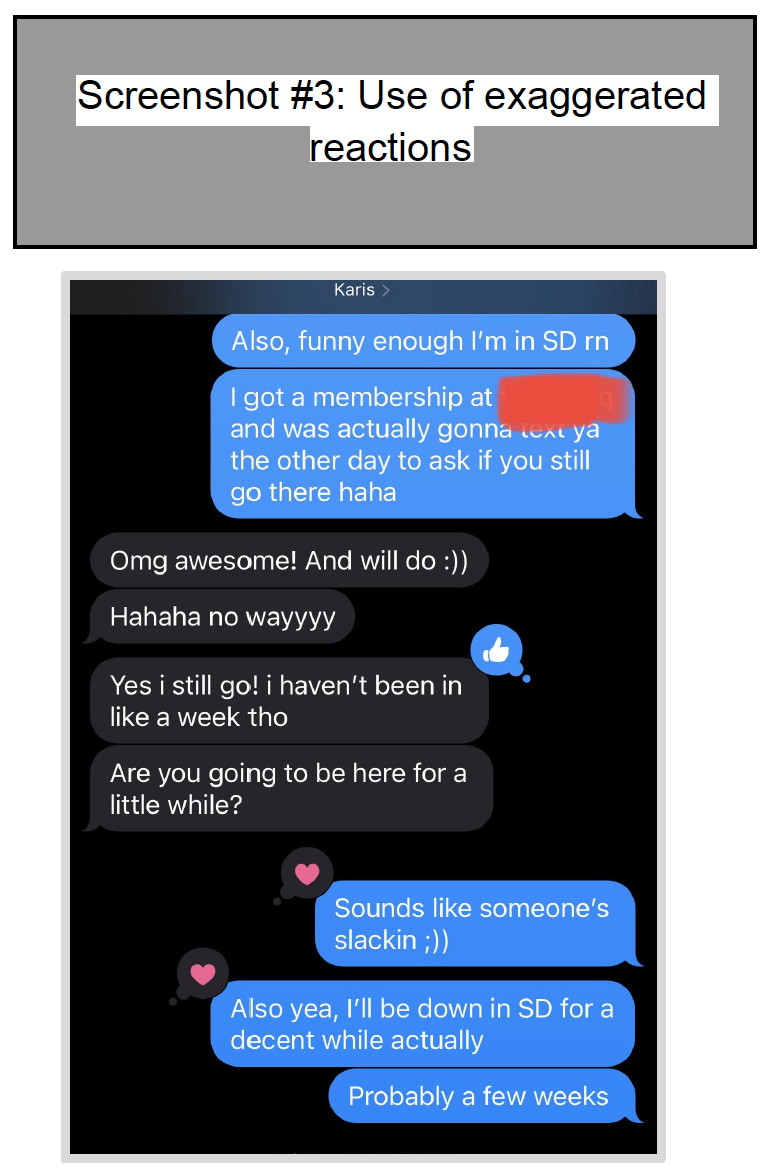 Relying on surveys, research, and media analysis we draw several conclusions regarding flirting behaviors among young adults. By analyzing our survey results we can conclude that flirting face-to-face is the preferred medium of both men and women. This came as no surprise to us but was very interesting to analyze the many possible reasons and explanations that resulted in this conclusion. One reason for this result is that both genders indicated that they found flirting in person to be perceived as more sincere, effective, and the most time effective method of getting to know a person they are attracted to. Virtual flirting was shown to be more prone to direct and risqué communication that can often be misinterpreted whereas in-person can be seen to show much more clear and precise expression of intentions. The more playful and sincere compliments observed through in-person flirting is preferred for both men and women over the more scandalous and risqué ones prevalent among virtual flirting. As we previously assumed, virtual flirting prompts much more exaggerated and animated reactions than in-person. We assume that this exaggerated behavior is used as an attempt to combat the non-verbal cues we get when flirting in person. These non-verbal cues include smiling, touching, laughing, as well as other micro-expressions we observe when you are attracted to another person. Those who are more introverted and less confrontational may prefer online flirting as their preferred medium as there is much less physical embarrassment when a flirting tactic fails to elicit the desired response. For an online flirting medium such as Tinder, where you most likely have not met the person, you are talking to and, the person may believe they have to come off strong to provoke a response and make an impression among a much larger pool of potential partners. While our survey did compare results among both men and women, our analysis found that the medium, rather than sex, has a much larger impact on the use and perception of compliments and exaggerated response when flirting. Overall, most of our research data and analysis confirmed our hypothesis that young adults prefer face-to-face over online flirting, leaving the door open for further insight that could promote future research on this topic.

Smith, J. (2014). The Perceived Impact of Online Versus Offline Flirting on Romantic Relationships . (Electronic Thesis or Dissertation). Retrieved from https://etd.ohiolink.edu/