Insults are sometimes regarded as negative or impolite; however, they can also be a playful ritual among various communities.  Consider, for example, the exaggerated “Yo Mama” jokes told between young school children.  Such insults are entertaining, performative, and unlikely to cause much harm.

This article explores the practice of mock ritual insults in the drag queen community, where such insults are referred to as “reads”.  In particular, this study looks at conversations from episodes of Ru Paul’s Drag Race—a reality television show where drag queens compete against each other—in order to analyze the content and linguistic aspects of reads.  Like other communities who practice ritual insults, queens display wit and humor in their reads.  Unlike insults in other male communities, however, reads use drag language and focus on content that is particularly relevant to the gendered performance of drag; this includes high pitched voice, feminine pronouns and addresses, as well as insults focused on fashion, makeup, and physical characteristics.  Despite the fact that reads usually involve insults against real traits in the addressee, surrounding queens and addressees usually respond to reads in a positive manner. This demonstrates how reading is a playful practice that not only entertains queens, but also helps them build a “thicker skin” against the real, non-playful criticism that they experience as a marginalized group.

Background on Ritual Insults in the Drag Community

The drag queen community is comprised of people (mostly gay men or other members of the LGBTQ+ community) who portray an exaggerated feminine gender performance, usually on a stage.  Ritual insults are common in the drag community, so much so that they have their own name: reading.  An explanation of reading is given by Dorian Corey in a documentary film about the 1980’s drag scene, Paris is Burning (1990).  Corey describes reading as “the real art form of insult”, which often involves finding a flaw in someone and exaggerating it in a way that makes people laugh.

The witty and clever nature of reads in the drag community is similar to ritual insult practices in other communities, such as games of “the dozens” in black communities or “Yo Mama” jokes told amongst school children (Abrahams, 1962; Eckert & McConnel-Ginnet, 2013).  The differences, however, are what give us insights into the distinctive characteristics of drag culture.  One difference is the truthful nature of reads in drag, which contrasts ritual insults in other communities that are usually not grounded in facts.  The truthfulness of reads is important, because it functions as a way to build thicker skin against non-playful verbal attacks from the straight community (McKinnon, 2017).  In terms of linguistic delivery, drag queen language often involves a blend of African American language, female language, gay men’s English, and Southern U.S. English (Bruun 2018).  This distinguishes reads from insults in other male communities, which typically involve hetero-masculine language and content.  This article provides a discussion of how these distinctive elements of drag insults are used in Ru Paul’s Drag Race.

While studying reads in Ru Paul’s Drag Race, I gathered data from various settings in the show, such as challenges, runway events, and conversations in the work room.  The biggest source of reads in the show was in the Reading Challenge, where each queen is given the floor (one at a time) to read the other queens.  The queen with the “best” reads wins the challenge (usually the queen whose reads receives the most laughter).  While watching the reading challenge, I took note of the subject of each read, such as fashion or physical traits, and any relevant linguistic content, such as wordplay and gendered pronouns.  I also categorized each read as unsuccessful or successful, where a successful read was one that elicited a positive response, such as audible laughter, from a majority of the present queens;  unsuccessful reads were those that are met with negative or quiet responses. The transcript notation used for data collection is given at the end of the article.

The content of reads varied, but they mostly revolved around performative aspects of femininity.  Table 1 tallies the number of reads in various categories, as well as the number of successful/unsuccessful reads in each category.

A representative example of a successful reading is Jujubee’s reads of Tyra and Tatiana in one of the Reading Challenges: 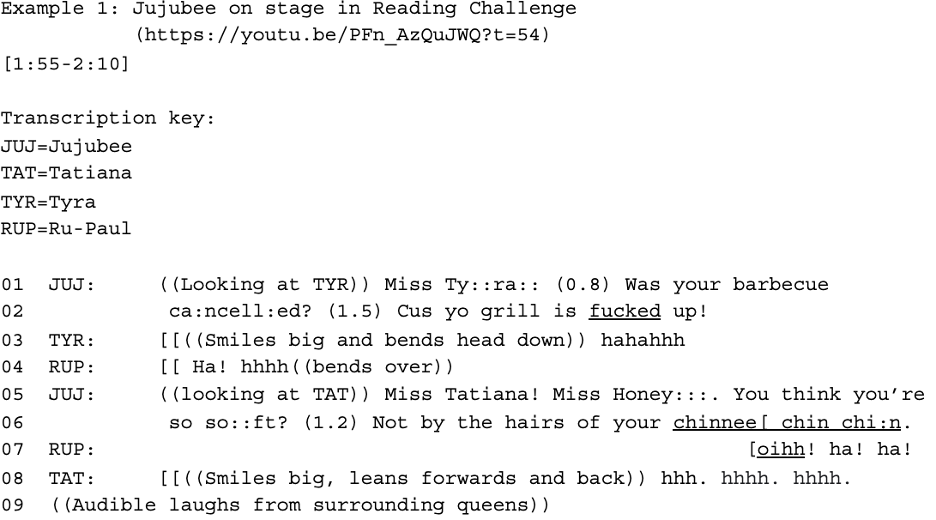 The laughs and smiles from the other queens in response to Jujubee’s reads indicate how successful her reads were.  They involved cleverness, feminine addresses (Miss Honey), and attacked physical traits and lack of femininity in the addressees.  The topic of reads, however, isn’t always enough to make a successful read.  Consider Tatiana’s read of Tyra’s teeth: 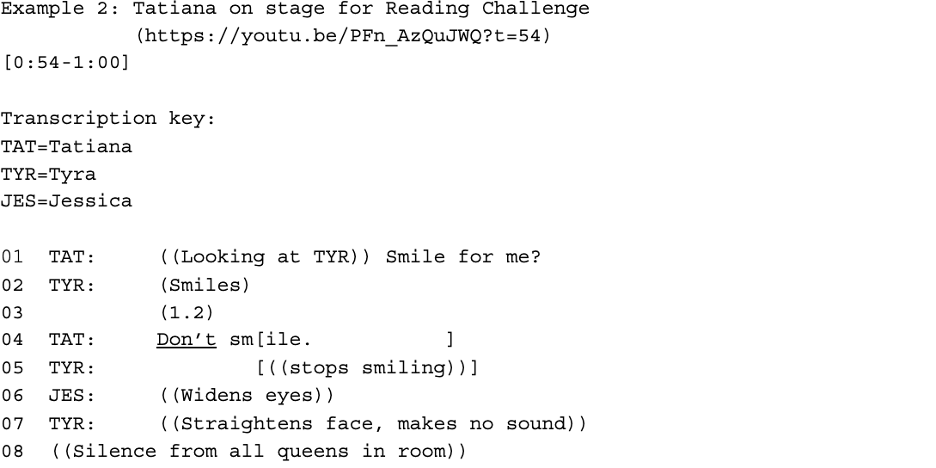 While Tatiana and Jujubee’s examples show the two extremes of unsuccessful and successful reads, it should be noted that a majority of reads were successful.  Most successful reads involved laughter not just from surrounding queens, but also from the queen being insulted.  This held true even when reads contained personal insults that the most people might be self-conscious of, such as being overweight or having unattractive facial features.  One example of this is Detox’s response when being read by Jinkx Monsoon: 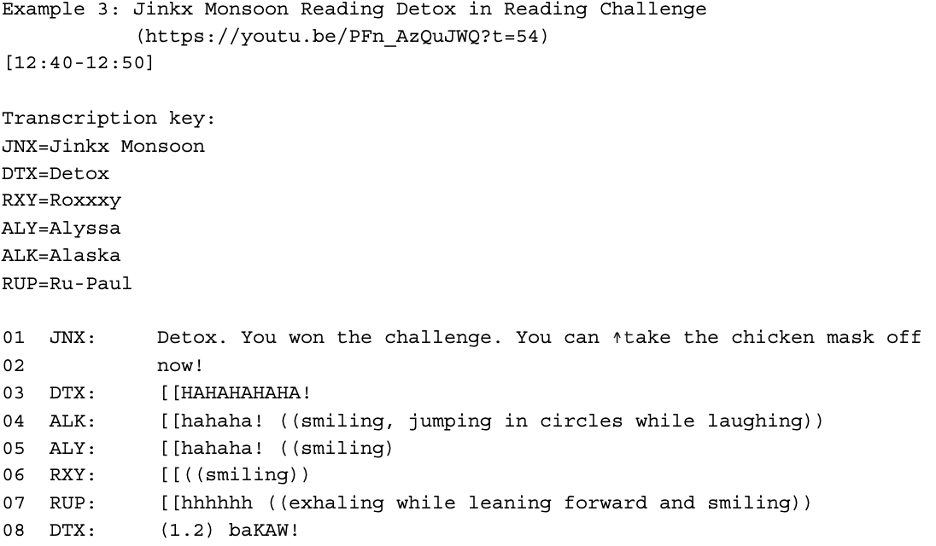 In this example, Jinkx was insulting Detox’s real face, comparing it to a chicken.  Instead of showing offense from Jinkx’s comment, however, Detox laughed loudly with the other queens and even joined in on the joke by responding with a chicken sound (line 08).  This highlights the playful nature of reading, even when it involves personal insults directed at real traits in the addressee.

From this collected data, it is clear that ritual mock insults have a distinctive form in the drag community.  The reliance on humor and wit is similar to other communities who practice ritual insults; the other linguistic aspects and topics of reads, however, reflect ways in which the drag community is unique from other primarily male communities.  What counts as a valid insult in any community reveals what is relevant to that community, and the reads in this article showed how portraying stereotypically feminine traits and minimizing masculine presentation is important to drag queens.  Reads revealed femininity through the subjects they focused on (fashion, makeup, physical traits) and through an exaggerated use of feminine language (high pitch voice, feminine pronouns).  In terms of how reads are perceived, most received positive responses from surrounding queens and from the addressee being insulted, even when they focused on actual flaws in the addressee.  Reads are a playful part of drag, and being able to both successfully deliver and gracefully accept insults in the form of reading is vital to thriving as a drag queen.

If you are interested in learning about or watching ritual insults in other communities and in drag, the following resources are useful: 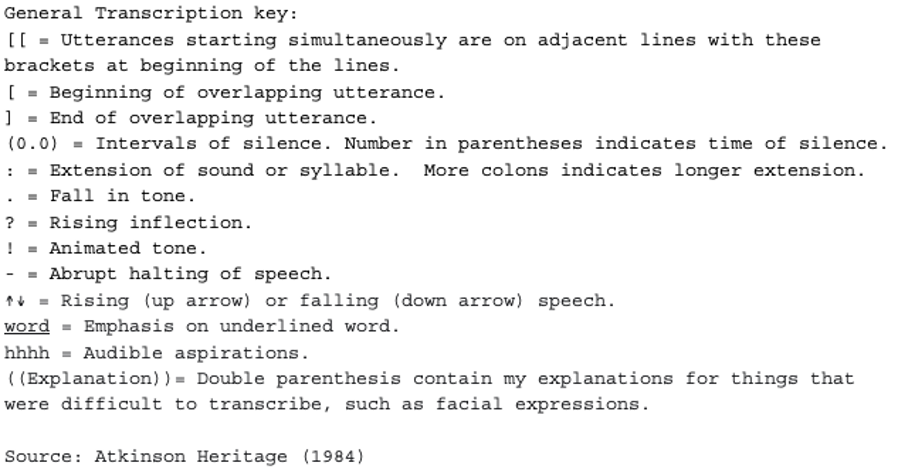 Bruun, M. (2018). “As We’ve Seen in This Season, Anything Can Happen, So Don’t Fuck It Up” – Impoliteness in Rupaul’s Drag Race Season 9. ​University of Eastern Finland Philosophical Faculty, School of Humanities, Foreign Languages and Translation Studies.​