In today’s day and age, a social media presence has become not only essential but  also a platform that defines us as individuals. In February of 2019, a statistic  showed that 90% of adults ages 18-29 use social networks because it is the new
“norm”. Up until the creation of more popular apps and interactive websites, social media was arguably far from a necessity and was seen as a way of  communicating or staying up to date with current news.

Now due to this shift, social media is seen as a defining characteristic of a  business or person. Also, interactive media and networks have given  bloggers, celebrities, etc credibility and a larger audience to influence  and illustrate their linguistic style that varies across written and  recorded platforms. Studying the individuals that society defines as “influencers” reveals the transformation of identities, and patterns of  intonation that take place on various social media, with these “celebrities” altering these tendencies between each media platform.

To get a better idea on how different intonation patterns can convey personality,  and based on the responses we got from a survey distributed to college aged  students, we decided to look more in depth on three people: Kylie Jenner, Jojo Siwa,  and David Dobrik. These three different personalities offered a different aspect of  intonation patterns, Kylie Jenner representing little variation, Jojo Siwa  representing a different approach with many variation patterns, and David Dobrik  being somewhere in the middle. We studied these individuals by going through their  content on various platforms (Youtube, Instagram, Twitter, etc). By studying these  influencers across the intonation spectrum, we can get a sense of what aspects of  intonation patterns can be used to display a specific persona. 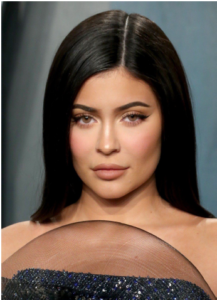 The first person we decided to look at was Kylie Jenner. She  started out by being a part of the Kardashian/Jenner family  and a reality show from the young age of 9, now is known  around the world as one of the youngest billionaires and has  many business ventures as well! She has been in the limelight and been immersed in the influencer culture for a large part of her life. She is one of  the highest paid influencers and her millions of followers across platforms makes  her a perfect candidate to study.

Looking through her Youtube videos, the first thought that stood out was her use of  uptalk and vocal fry. ​In this video, one can see that her speech is characterized with a rising  pattern at the end of her sentences, which is uptalk, and how she also uses a very  low register in her speech giving a creaky sound which is vocal fry. Even the  comments on her post took notice of her use of uptalk and not surprisingly were  divided on it, some thinking it sounded more professional while others were  bothered. Another viewer also pointed out how all of the Kardashian/Jenners speak  this way and though this could just be a part of Kylie’s linguistic style it could also  be a way for her to solidify part of her identity, which has been associated with this  family her entire life. Another thing that stood out studying her videos was Kylie’s limited variation in  her intonation. ​In this video, even when Kylie is making exclamations like “7!” or “ooooh what’s a 7 pump” her intonation does not change much and it. It almost feels  like there is more excitement or variation in my transcript of those comments! In a  more recent video, she goes on to explain how she restrains her personality or  almost plays a character in videos and on social media deliberately, in which she  could possibly be using intonation as a tool to show less of her personality while still  giving new content.  Looking through her Instagram posts, we noticed that she portrays a very similar  intonation pattern through her captions.

By using no capitalization and very few exclamation points and punctuation in her  posts, she is able to convey a certain tone with an unwavering pitch, which is  similar to her speaking style. 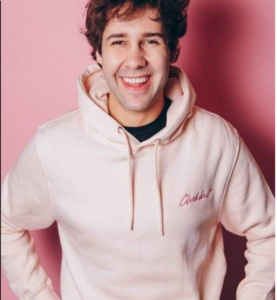 Many may know him for his infamous 4 minute and 20  second vlogs or his debut on an application called Vine in  2013, but today he is recognized for his presence on various written and video platforms. He is probably more successful than I will ever be in my  lifetime, having millions of followers across, YouTube,  Instagram, Twitter, and Tik Tok. David also has a  networth of over 15 million at the age of 24.

When it comes to his identity and how he portrays himself across tweets versus his  vlog content, one would potentially think he was two different people. In his written  work David used capitals throughout. “CHIPOTLE NAMED A BURRITO AFTER ME” is  an example of how explosive he can be. Or “NOT WITH THAT ATTITUDE”  demonstrates that aggressive identity one would think he would have. When  reading either of these, one may even interpret these tweets as YELLING at you!

On the other hand, after observing hours of videos produced by David, there were very few instances where he continued this kind of eruptive intonation. The only  times he changed his tone or portrayed himself as “loud” was when he was  laughing. To better understand where his inflection lies in his videos, we used Audacity to visualize where this burst of intonation exists. Below you can see a clip of David speaking where the loudest and tallest waves represent him laughing. The in  between represents his normal speaking voice.

We found David to be the most inconsistent when it came to his intonation, which is  why we also saw him as a good middle ground between Kylie and JoJo. Having  someone like David Dobrik, he is a good individual to have as the intermediary  control. He shows viewers how much intonation JoJo Siwa has and how little  intonation Kylie Jenner has. He originally identified as a YouTuber, but I believe as he tried to transition to other  platforms his identity became inconsistent. It seems he uses capitals in his written media to grab attention more than showcase who he is as a person. His random capitalizations and phrases where he seems to be yelling at his audience, could be a publicity stunt more than an identity trait. He does have moments of strong intonation variation but it does lack that sense of constant variation like his  written platforms would infer. Maybe it is time someone takes his computer and  turns his CAPS lock OFF! 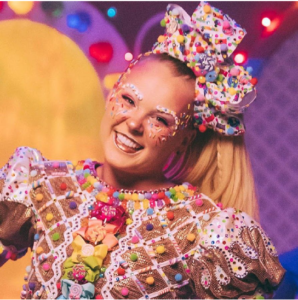 Jojo Siwa or more formally known as Joelle Joanie Siwa is a  well known American dancer, singer, actress on  Nickelodeon, and also an infamous influence on YouTube.  She has 12 million subscribers on Youtube and about 10  million followers on instagram. Jojo Siwa began to attract  the public’s eye in 2014 at the age of 11 years. Since then she  has had hundreds of millions of views on her videos and is known for being very outgoing and extroverted with sporadic behavior and  varying intonation in her voice. Her pitch varies in order to allure the audience and  attract their interest so that she can get them to invest their time on her. 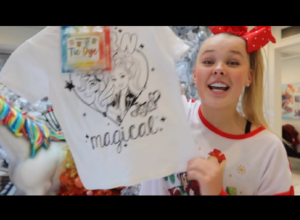 She shares very similar styles of intonation across both video and written platforms as she uses lots of exclamations in her statements. In one of her most recent videos, Jojo Siwa mentions the word “Tie-dye” twice in consecutive order, however uses two different variations of intonation. The first time she uses the word, she includes rising intonation and the second time the tone is falling intonation. She proceeds to say the word a few more times throughout the video with varying types of intonation. What’s also worth mentioning is that Jojo Siwa tends to lengthen the duration of her vowels and adds nasality in her voice, however that may be due to the nature of her vocal chords. She employs all these  different linguistic aspects in order to promote her character as an influencer and  attract her audience to purchase her merchandise. This compulsive behavior really  targets and pulls the interest of many as comments mention the love for the way  she behaves.

Similar to her voice on video platforms, she tends to add all capital lettering in her  posts and repeats letters to add emotional appeals. Her social media accounts all  carry the same text aesthetic involving this very family friendly speech. Her voice is very reminiscent in her tweets and IG messages and wants to persuade people to get  involved in her life. As you notice there are also lots of exclamation marks and use of emoji’s and by her facial expressions, she always appears to give off an ecstatic/ overly-cheery identity/personality. She is meant to appeal to children, which is why  she constantly gives off this radiant energy. 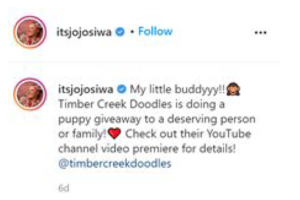 After interpreting what we observed and our results, the conclusion drawn was  that social media platforms give influencers the chance to expose their pitch range, identity, and intonation variation. This differed between all the celebrities studied. These influencers construct an identity through social media platforms and their  style may shift but it does not always, as it is really dependent on the person.  Intonation is just one of the tools influencers may or may not choose to employ in  their linguistic style and we can see that based on these three personalities. Although intonation is an effective tool to display a persona, it is not always used or  consistent. These influencers choose to embrace their own identity which is best  catered towards the content they are trying to put out.