This study investigates gender differences in written language. Particularly, by analyzing cover letters for women-preferential language indicators, we find how gender is enacted in formal, written contexts. Furthermore, we investigate how usage of women’s language indicators is affected when discussing subjects deemed to be masculine or feminine. Therefore, by surveying participants for their attitudes towards STEM and Humanities fields, we find that identification of a subject as masculine or feminine did not have as significant an effect on language usage as whether participants perceived the fields to be female or male-dominated. Therefore, this study finds that considerations of social and audience expectations plays the greatest role in whether writers use of gender-linked language indicators.

While people know that there are differences in the way men and women think, there has been an influx in research that proves that these differences extend to the communicative level, that is, the way that people use language. Studies focused on the ways that biological sex impacts language fail to understand that the key factor in gendered language is in the performance of these differences (Fitzpatrick, Mulac, & Dindia, 1995). In other words, people behave in ways that follow their perceptions of gender and masculine and feminine identities (Janssen & Murachver, 2004). In these situations, the question becomes: how do people perform gender?

‘Performance’ within language can be seen in the ways that people phrase things, their word choices, tone, voice pitch, etc. All these factors and more can influence how people express their gender identity. However, the ways that these factors indicate femininity or masculinity differ between spoken and written forms of communication. Additionally, these factors might be affected by different external influences. For instance, writers do not receive immediate feedback based on the reactions of the person they are communicating with; hence, they are not directly faced with social and audience pressure to behave in alignment with gender stereotypes (Janssen & Murachver, 2004). Furthermore, writers have more time to consciously construct their content and thus are able to modify the degree to which they reveal gender (Janssen & Murachver, 2004).

Robin Lakoff’s findings in Language and Woman’s Place (1973) indicates the existence of ‘women’s language,’ which is characterized by an identifiable group of linguistic features, including hedges (e.g. sort of), fillers (e.g. well, you know), tag questions (e.g. She’s very nice, isn’t she?), empty adjectives (e.g. charming), and intensifiers (eg. I like him sooo much.), among others. According to Lakoff, using these “women’s speech” features function to express femininity, lack of assertiveness, and subordination in a male-dominated society (Lakoff, 1973). The difficulty in using these features to support Lakoff’s claim about subordination and dominance can be seen in the way multimodality of these features within communication. For instance, tag questions can be used as a form of passive-aggressive speech and as a way to show subordination. Lakoff called these features “women’s language indicators” because of their increased presence within women’s speech. Additional research has also reported the existence of similar phenomenon. In a study by Fitzpatrick et al. (1995), women reportedly used more polite forms of speech, made references to emotion, and used communication to develop and maintain rapport, whereas men were more likely to report facts, solve problems, and debate issues. In this case, the phenomenon might be the same, but the reasons for their appearance differs.

However, this understanding of women’s language indicators within speech has generated a few questions. Are these really feminine language indicators or are they product of something deeper? Does society influence the way that people communicate, not just within speech, but also in their writing? Can this affect how people are perceived when applying for jobs? While the possibility of language indicators actually affecting the success of job applicants is the debate of another study, this research attempts to understand if there is a certain degree of transfer in these features across mediums and the extent to which these indicators are present in written works.

If Lakoff’s (1973) observance of the dominance model is correct, it suggests that people – in particular, women – use subordinate speech to ingratiate themselves with the people around them. This is particularly relevant in environments like the workplace, which have hierarchical positions of dominance and subordination that might influence an individual’s chance of success or failure beyond their conversational capabilities. In addition to the dominance model, there are other reasons why feminine language indicators might appear in written forms of communication. For instance, when speaking about topics deemed to be feminine, individuals tend to use more feminine language indicators and vice versa (Janssen & Murachver, 2004).

The objective of our research is to determine if women’s language indicators also occurs in written, formal works, particularly within cover letters, where the usage of hedges and fillers, may be considered inappropriate. We will identify which linguistic features are indicative of women’s language in formal written contexts and how frequently they occur. In addition, we will analyze whether the interpretation of topics — like STEM or Humanities fields— as masculine or feminine affects the frequency of women’s language features used in writing and the degree of influence in comparison to personal gender identities.

As we conduct our research, we hypothesize that gender-associated linguistic features will be evident in formal written forms of communication. Additionally, we predict there will be an inclination to use features associated with women’s language when discussing subjects determined to be feminine and an aversion from using such forms when the subject is interpreted as masculine.

Based on these hypotheses we have generated several predictions about our research. First, while the perceptions of the gender divide – as well as expression of the participants’ gender identity – will have the most influence on indicator usage, topics deemed masculine or feminine will also have an impact on language use. Since we predict that STEM fields will be considered masculine and Humanities fields feminine, that women will have more indicators than men, and that individuals in the humanities fields will use indicators more often than STEM, we predict that the greatest number of these feminine language indicators will be present in cover letters written by women/feminine identities in the Humanities field.

The usage of these indicators can inform us on how and why gender differences in language are performed in different contexts. It will also help to explain why perceptions of STEM and Humanities fields work in correlation with feminine language features. Based on our results, we might be able to find implications for whether linguistic features can be used by both men and women as they modify their usage in specific contexts to align with particular expectations, which would have implications for how we perceive gender.

This study was conducted through surveys and analysis of the submitted cover letters. Participants were asked to fill out a survey asking several questions related to their background and views on related topics, like how they perceive STEM and Humanities fields. See Appendix for details. They were also asked to upload a sample copy of their cover letter. This sample was then analyzed through a series of software (called Atlas.ti Cloud and Voyant) that are designed to create ‘codes’ qualitatively and quantitatively code for particular language features. Particularly, we coded for five women’s language indicators: 1) Hedges: which we defined as being indirect, vague, cautious (perhaps, maybe); 2) References to Emotion: such as happiness, sadness, love; 3) Uncertainty Verbs: like think, believe; 4) Empty Adjectives: which we defined as adjectives that “soften” speech without contributing meaningful information beyond a slightly positive meaning (adorable, gorgeous); and 5) Intensifiers like really, so, extremely. For example, the indicators analyzed are shown in the table below. 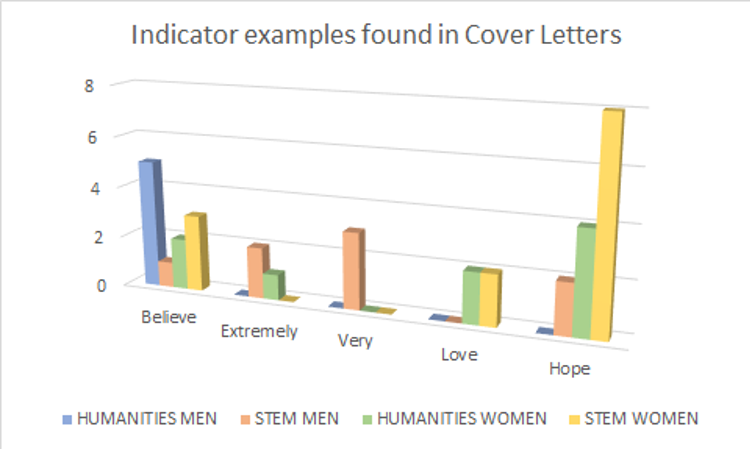 We also calculated the average frequencies between each of the categories that we were looking at: women, men, STEM, Humanities, Humanities women, Humanities men, STEM women, and STEM men. Additionally, we found the standard deviation for each of these groups to better understand the amount of variance found amongst them. 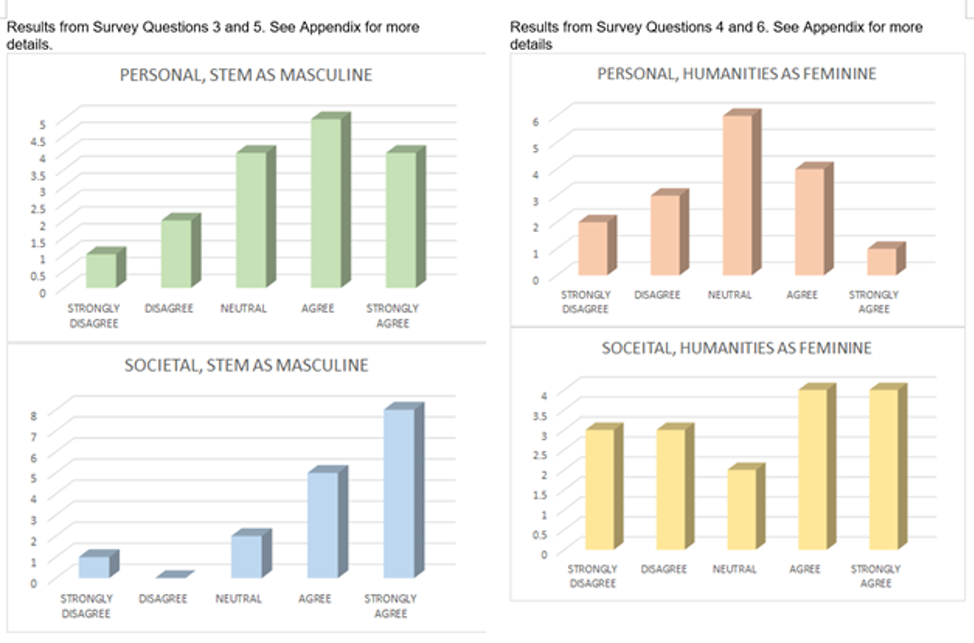 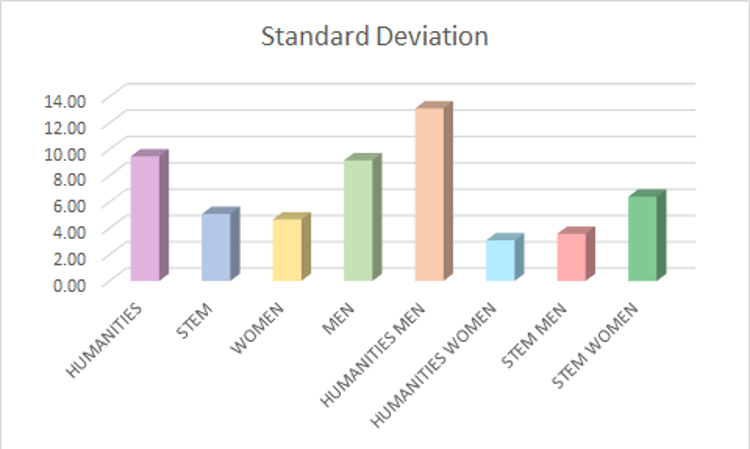 The central finding of this work is that STEM women and STEM men use feminine language indicators more frequently than their Humanities counterparts. While we predicted that Humanities women would have the highest frequency of feminine language indicator usage, women in general used these indicators more frequently than men, regardless of their fields. This suggests that there are additional factors that might have influenced the results.

After tallying the responses to the survey (see Appendix for more details), it is clear that people’s impressions of the STEM and Humanities fields had an impact on their usage of feminine language indicators. As mentioned previously, while the participants’ perceptions of the language divide were mixed for Humanities, they consistently perceived a divide within STEM, which indicates that they might have been influenced by these perceptions when writing cover letters. In accordance to Lakoff’s model of dominance and subordination, their higher frequency within the STEM fields also implies that participants are more sensitive to the ways that gender and power interact within STEM fields.

While this study contributed to our understanding of the interaction between gender and language, there are several limitations. The small scale of the study makes it difficult to determine if the phenomenon observed extends beyond our small population. The results of this study imply that it is inaccurate to call these linguistic features ‘women’s language indicators’ as they are present in both genders. Instead it would be better to say that these language features are the result of the perceived dominance divide between men and women, but also that these are ‘subordination indicators’ and not necessarily restricted to women’s language. To claim otherwise ignores their presence within men’s speech and written forms of communication.