The Princess and the Frog, the diversity jewel in Disney’s crown, might not be as progressive as you’d think. Pink frilly dresses, big blonde hair, bows and sparkles, and an over-the-top, ditzy personality–it’s a stereotype we’ve all seen before in movies and tv. The creators of The Princess and the Frog took this well-known “dumb blonde” stereotype to another level with the character Charlotte La Bouff, and in doing so, perpetuated a stereotype to their viewers, many of whom tend to be very young.

It’s clear from her appearance that the New Orleans princess enjoys the feminine things in life. Charlotte visibly conforms to many misogynist stereotypes in both her appearance and her viewpoint. However, the focus of our research is to investigate whether her over-the-top feminine portrayal carries through in her speech as well. We have identified several linguistic features through other research that sound stereotypically feminine: uptalk, repetition, interjections, and rapid speech.

If Disney has employed these markers in the stereotypical portrayal of a female character, then they have presented a platform for impressionable youth to internalize these unsaid judgements. We are curious as to whether these aspects are more common in Charlotte’s speech than in that of the other main characters, Tiana and Naveen, whose presentations are less traditionally feminine.

In Disney’s The Princess and the Frog, the ditzy side character Charlotte is depicted as an overemphasized representation of femininity.

She is the beautiful, blonde princess, and her character carries all its demeaning perceptions: being unintelligent, emotional, spoiled, superficial, and socially incompetent. Her personality and appearance often exaggerate these characteristics–she has a high-pitched voice, often wears puffy pink dresses, and her main goal in life seems to revolve around “finding her prince.” The way she speaks also reflects this feminine stereotype.

Comparing how often Charlotte uses these features to that of the other characters could reveal how the film uses language to stereotype Charlotte as superficial and stupid. For instance, by contrasting Charlotte with Tiana, we see that Tiana’s personality and appearance are much less stereotypically feminine.

Tiana is portrayed as responsible, practical, intelligent, and grounded, opposing Charlotte’s over-the-top personality. This is important because society often stereotypes individuals similar to Charlotte, either by making them seem dumb or criticizing this representation of women. Furthermore, studying the portrayal of these stereotypes in Disney movies is especially important, since Disney’s audience is young and impressionable.

We theorized that specific aspects of Charlotte’s linguistic performance emphasize the stereotypes that go along with her character: to the audience, she is just an airhead. We will explain why it was so easy for Disney to use these aspects to box Charlotte in under “Background.”

Our goal is to analyze how specific aspects of her speech help her sound more stereotypically feminine, that is, dumb, emotional, and socially unaware. To do so, we will focus on her use of uptalk, rapid speech, repetition, and interjections. We will compare how often she uses these linguistic aspects with two other characters: Prince Naveen, a male, and Tiana, a female who displays more masculine characteristics, such as being hardworking, practical, and independent.

We will focus our study on Charlotte because she is a side character included for comedic purposes, and therefore the stereotype is exaggerated,  as well as to contrast Tiana’s character. As a result, we expect these stereotypes to be plentiful and more noticeable in Charlotte’s language than in that of the other characters.

Charlotte plays a rich, white princess in 1920’s Louisiana. She is an upper-class woman who displays acts of significant extravagance, lack of awareness, egotism, and shallowness, which are representative of a typical wealthy woman of this time. Her exorbitant wealth acts to demean her in a story about the American Dream, and her indoctrination in 1920’s gender roles helps categorize her as shallow.

If her appearance, worldview, and speech patterns weren’t enough to define her as a feminine stereotype, you only have to look at what she actually talks about: every time we see her, Charlotte is obsessing about a man, a prince. Disney defines her as “girly” by giving her dreams of a little girl: to marry a prince and become a princess.

We will be analyzing the linguistic patterns of Charlotte, Tiana, and Prince Naveen, and how they might factor into the overall portrayal of feminine expression in the Disney film.

A push for the audience to draw unfavorable conclusions towards individuals who hold the same linguistic and characteristic patterns as Charlotte causes prejudice. Disney designates Charlotte as a stereotype as a way to further emphasize the fact that feminine women like her only serve a role as side characters.

The linguistic aspects we will be investigating are uptalk, rapid speech, repetition, and interjections.

Uptalk refers to when your vocal tone rises at the end of a phrase, as it would in a question. It is often seen as expressing inferiority, lack of confidence, etc. It can be seen across cultures or dialects and usually occurs in a group that society puts into an inferior position (Guy, 1986). Uptalk has been recorded in teenagers and the working class, but it is the most identifiable as being feminine and is generally understood as a female trait.

Rapid speech refers to Charlotte’s tendency to speak faster than normal, or at least more quickly than Prince Naveen and Tiana. It has been observed in numerous scientific studies that men believe that women talk more frequently and faster than they actually do. Studies such as Cutler (1990) show that women are often perceived as talking faster and more often than they really do in everyday conversation.

Also, repetition refers to Charlotte’s tendency to state the same words or phrases in quick or immediate succession. Repetition is often used for emphasis or to imply desperation or urgency. Thus, Charlotte’s use of repetition could highlight her portrayal as being dramatic.

Finally, interjections are words that are thrown into sentences that seem to be unnecessary or lack meaning, such as “Oh!” or “Eek!”. They are often an exclamation and are usually related to an emotional reaction. Since women are often stereotyped as being overly emotional, Charlotte’s frequent use of interjections further characterizes her this way.

In this experiment, we quantified the linguistic aspects we found to be related to feminine stereotypes.

We contrasted each variable’s occurrence in Charlotte’s speech with Tiana and Naveen’s, whose language patterns tended to remain relatively consistent throughout the dialogue. 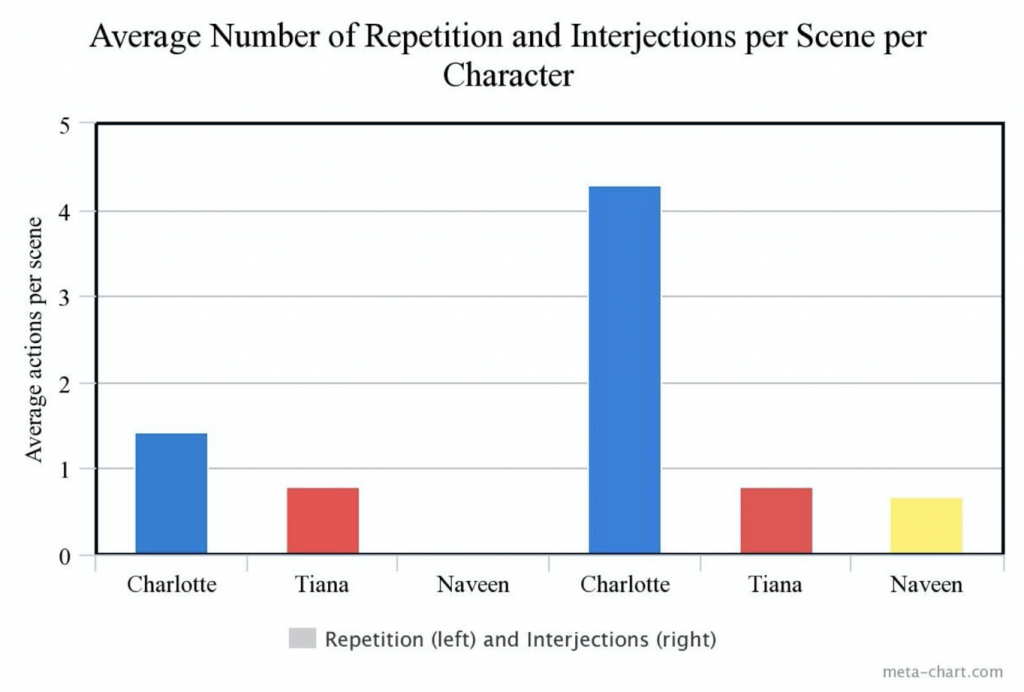 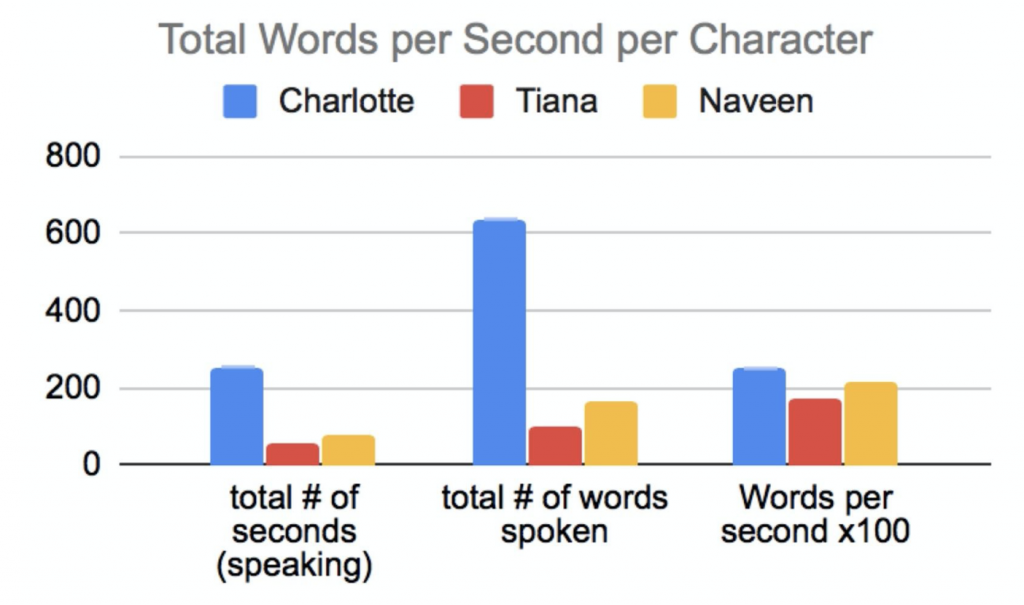 As illustrated in the second graph, Charlotte has a higher rate of words per second used in comparison to the rates depicted by Naveeen and Tiana. As Charlotte speaks at a rate of 2.20 words per second, while Tiana and Naveen speak at rates of 1.80 and 2.10 words per second. In other words, proving that there is a faster rate of speech in Charlotte’s speech patterns. 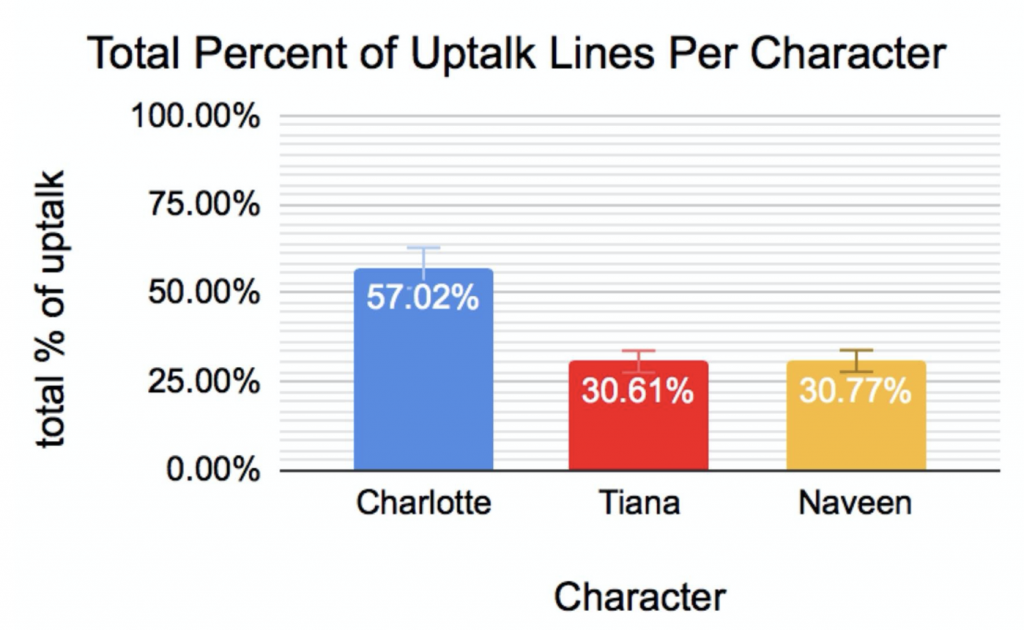 As illustrated in the third graph, nearly 60 percent of Charlotte’s lines were examples of uptalk. This percentage was almost double that of both Tiana and Naveen’s total percent of uptalk lines, which were both around 30 percent. This data proves that Charlotte uses uptalk much more than the other characters, likely as a result of her overly feminine portrayal.

Many baseless standards and stereotypes are placed onto women’s speech. We see a prime example in the character Charlotte, whose personality is drawn completely from the stereotypes of groups she is a member of. We see this especially in her frequent use of uptalk, repetition, rapid speech, and interjections compared to the other characters. For these reasons, it is conclusive that Charlotte’s portrayal is indicative of Disney’s corporate misogyny and exploitation of linguistic stereotypes.