Many sociolinguists argue that gender asymmetry exists, and that language both reflects and perpetuates this inequality. One such area of linguistics that showcases this inequality is interruptions. Intrusive interruptions have been correlated with dominance and power, and many can agree that males are usually more dominant and interruptive.

The Bachelor franchise, which includes multiple reality dating television shows, creates a unique environment for the study of language and gender. Given the competitive nature of the shows, there are often instances of conflict and high-stress discussions. Eleven mixed-sex conversations which were typically about intimate relationships and feelings, as well as eleven same-sex conversations which were typically more combative, were chosen from these shows and analyzed for successful interruptions to expose a gender-related language asymmetry. 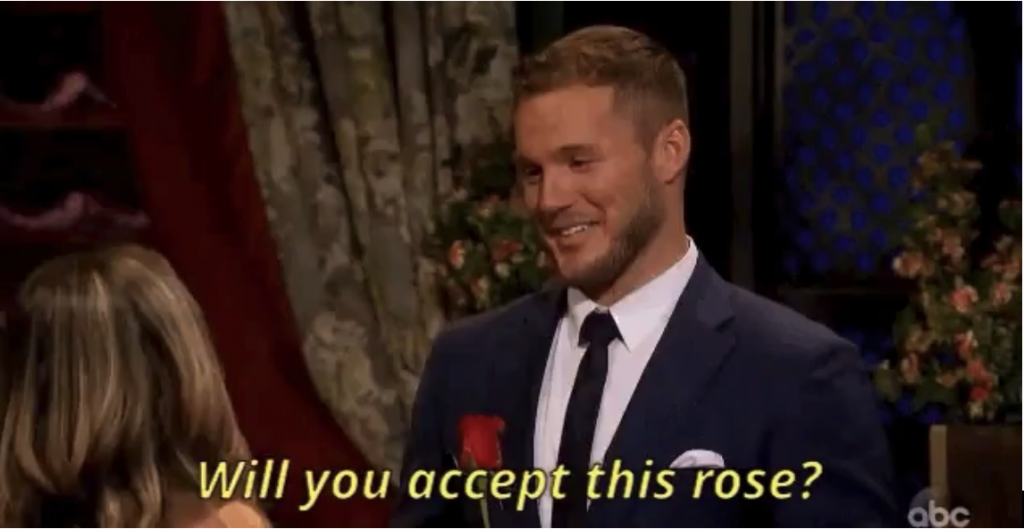 Intrusive interruptions have been associated with dominance, suggesting that in conversation, the participant who makes more interruptions would be more dominant. One study found that in pairs of mixed-sex conversation participants, the individual that identified themselves as the more “dominant” personality showed a higher frequency of interruptions, regardless of their gender (Kollock, Blumstein, & Schwartz, 1985). Another study found that parents were more likely to interrupt their children than vice versa (West & Zimmerman, 1977). These results support the notion that interruptions are related to dominance, but not implicitly tied to gender.

However, if one gender has an overall tendency to be more dominant, one would observe more interruptions in the more dominant gender. Robin Lakoff’s proposed dominance model of communication maintains that men are dominant and women are subordinate, and that this asymmetry is reflected and maintained by language (Eckert & McConnel-Ginet, 2013, p. 39), which suggests that we would observe a higher frequency of interruptions from males than from females in mixed-sex conversation, and no such inequality between participants in same-sex conversation. There are many situations that have found this to be the case, like in public university conversations (Zimmerman & West, 1975), or in supreme court arguments (Feldman & Gill, 2019).

There are also conversation contexts in which other power dynamics overshadow Lakoff’s proposed gender power dynamic, like the parent-child example (West & Zimmerman, 1977), or in the Bachelor franchise. This is explained by Judith Butler’s performativity model, which maintains that gender is “performed,” meaning people make individual choices on how to act in certain contexts to best maintain and perpetuate their gender identity (Eckert & McConnel-Ginet, 2013). This phenomenon was exemplified in this study once the contexts of the conversations analyzed from the Bachelor franchise were explored. 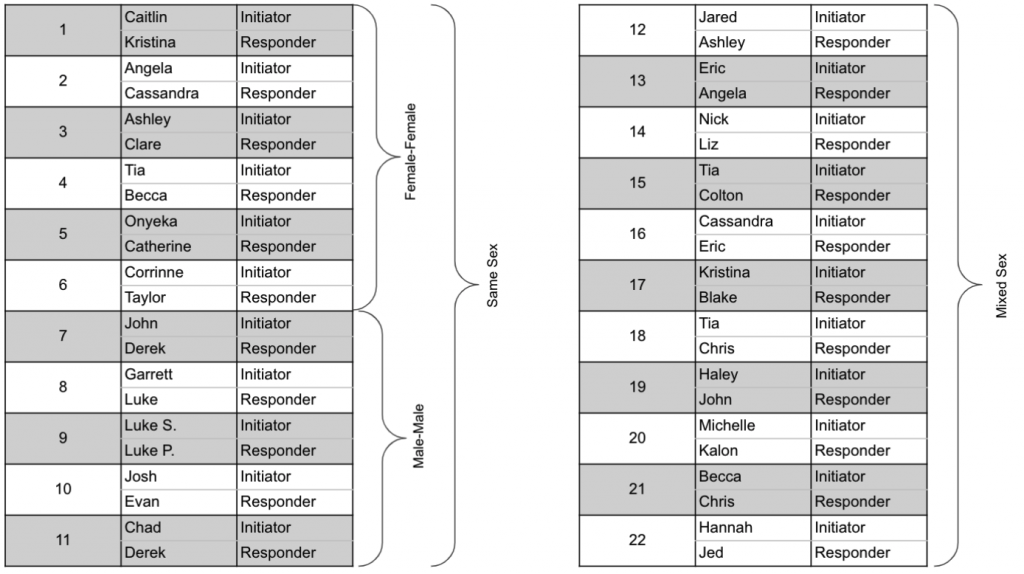 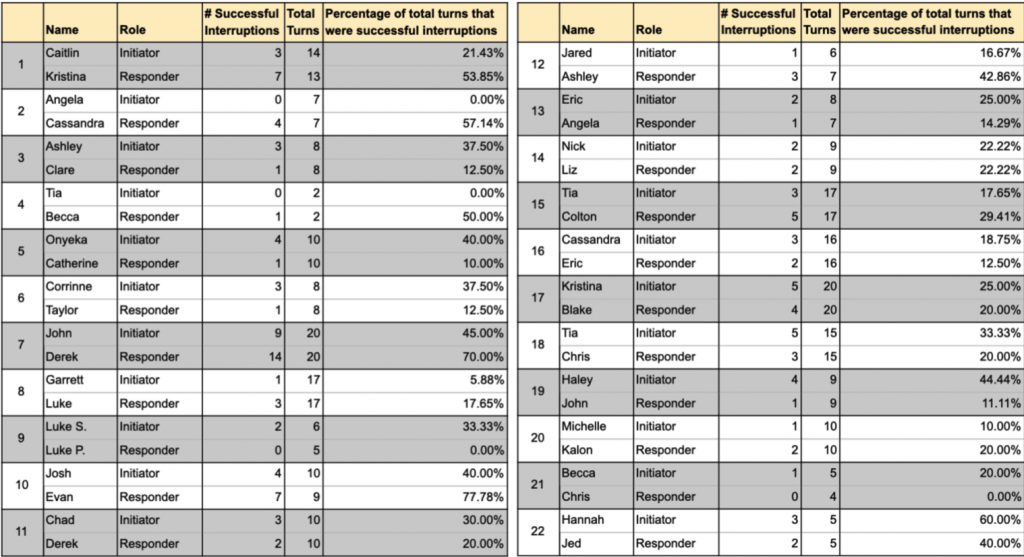 Across all twenty-two conversations, males and females made successful interruptions at the same frequency (Table 1a and Figure 1a). This suggested that any inequality observed was not in total volume of interruptions, but in how each gender distributed their interruptions across genders. In fact, females interrupted other females at the same frequency that they would interrupt males. However, males interrupted other males much more than they would interrupt females (Table 1b-c and Figure 1b-c), showing that the asymmetry seen was because men acted differently in mixed-sex versus same-sex conversations. This resulted in the observation that females were more “dominant” in the mixed-sex conversations than the males were (Figure 2).

An alternate way to interpret the data is provided in Tables and Figures 3 and 4. Females interrupted each gender at the same frequency while males interrupted males more than they interrupted females. This was consistent both when the frequencies were obtained by counting total interruptions across one gender (fragment) and when the frequencies were obtained by counting interruptions of an individual and finding the average across one gender (individual).

Earlier, we showed that the asymmetry observed was due to males acting differently in different conversational contexts (since females showed no difference between mixed versus same-sex conversations). So, why did males interrupt each other more than they interrupted females?

Prior research has shown that men show resistance to communicating intimate feelings (Jansz, 2000), and express anger more than women do (Brody & Hall, 2008). Women have also been shown to be more emotionally expressive about their feelings than men (Kring & Gordon, 1998). This offers an explanation as to why males interrupted more successfully in same-sex conversations, which in this study were usually aggressive, than they did in mixed-sex conversation, which in this study were usually about intimate feelings. Males were less inclined to participate in conversations involving intimate feelings, so women dominated more simply because men dominated less. However, males were more expressive in anger-driven conversations than women were, so they showed an increased amount of interruption in same-sex conversation, which was not observed in female same-sex interruption. Males’ ability to switch from being more dominant in certain contexts and less dominant in other contexts, with both actions upholding the male identity, supports Judith Butler’s idea that gender is performed.

The findings of this study provide an example of Judith Butler’s performativity model by showing that males can modify their behavior in different contexts to maintain their masculinity. Being more dominant in conversations involving anger is associated with the male identity, but being less dominant in conversations involving emotions and feelings is also associated with the male identity. However, just because males can be less dominant in certain situations does not mean that Robin Lakoff’s dominance model of communication has been disproved, because in general there are likely more contexts in which females are subjugated and males are dominant.

Lastly, the observations made in this study reveal a lot about the types of conversation that television show producers expect to be most entertaining. The abundance of aggressive arguments in same-sex conversations shows that these may be the types of dynamics that are received well by reality television fans. They also aired a lot of feelings-based mixed-sex conversations, increasing the “dramatic-ness” of the show. Ultimately, the Bachelor franchise producers successfully created a very entertaining platform for the study of unique gender-dynamics.