With YouTubers, or influencers, rapidly pervading the younger generation’s social media spaces, the following article takes a stab at uncovering the linguistic patterns of successful interruptions and rising intonations at the end of declarative statements in YouTubers’ language. This observational study’s sample consists of beauty and comedy influencers, the types of YouTubers who tend to produce some of the most popular types of videos. This study examined five-minute segments of videos between influencers conversing while completing an activity. These conversation segments were transcribed and the functions and how often the above linguistic features occur were used to determine whether these language patterns expand on, diminish, or add new insight to previous literature regarding power imbalances and gender displays. Does YouTuber “lingo” provide directions as to what the younger generation may ultimately embed into their own speech? Will we become the next James Charles?

The microcosm of YouTube is a popularly visited platform but is a relatively unexplored field in research. Information regarding YouTubers’ speech is primarily centered around voice, such as in this article from The Atlantic. Influencers are YouTubers with a large following on YouTube and belong to a community, such as beauty, comedy, etc. and often film collaboration videos together, in which they complete an activity together while conversing in front of a camera.

Excerpts from conversations were analyzed in relation to previous studies’ findings. Lynn Smith-Lovin and Charles Brody’s work on social status in groups suggests that successful interruptions are attributed to men’s indexing of power and masculinity (1989). As well, in Roger and Schumacher’s 1983 study, and Roger and Nesshoever’s 1987 study, they found positive relationships between successful interruptions and dominance traits (Tannen, 1999). In addition, uptalk has been associated with women’s language (Gorman, 1993). From Penelope Brown’s 1980 study on politeness in villagers in Tenejapa, Mexico, she found that females tended to put more effort in enacting positive politeness than and toward men, which she and Stephen Levinson described as conveying unity (Eckert & McConnell-Ginet, 2013).

Altogether, this study’s motivation was to identify whether choices behind successful interruptions and uptalk were common in the speech of YouTube influencers, and reflected observable gender identity performances and power asymmetry expressions. Even though these linguistic practices’ links to gender and power, there exists little research in the context of YouTube. Hence, this study demonstrated that despite the presence of a camera, gender and power hierarchies in influencers’ conversations resembled those in non-YouTuber interactions, and that successful interruptions and uptalk normalize social imbalances between genders on the platform.

Five-minute YouTube video segments of dyadic, single and mixed-gender interactions between influencers within and across the beauty and comedy domains were transcribed and analyzed. Conversation and discourse analyses were performed on dyadic interactions between male and female American, native English-speaking influencers. The following pairings’ conversations were analyzed: Jeffree Star and Tati Westbrook, Jeffree Star and James Charles, Jeffree Star and Shane Dawson, James Charles and Liza Koshy, James Charles and Jenna Marbles, Bethany Mota and Kian Lawley, and Jaclyn Hill and Kim Kardashian. In transcriptions, successful interruptions were indicated by a red square bracket with no corresponding right square bracket in the person being interrupted’s line of speech, while uptalk was marked with a blue question mark and the associated declarative statement in blue.

The five-minute video segments produced consistent, significant results in successful interruption and uptalk frequencies, summarized in Tables 1-4 (see Appendix A). In the transcribed conversations, female influencers were interrupted more frequently by male influencers and used uptalk at a similar or greater frequency than males.

In male-male interactions, each successfully interrupted the other with the same frequency, but their uptalk frequencies were imbalanced.

In the female-female interaction, successful interruption and uptalk frequencies were imbalanced, in that the female who successfully interrupted more often did not use uptalk more, which deviated from the pattern in mixed-gender data.

Previous research points to successful interruptions being associated with males to establish dominance (Smith-Lovin & Brody, 1989). This power move is depicted in the transcribed conversation between beauty influencers Jeffree Star (coded JEF) and Tati Westbrook (coded TAT), in which they talk about Jeffree’s choice of shaving his eyebrows:

Tati provides a supportive backchannel in line 235 (timestamp 8:41), in which she is successfully interrupted by Jeffree so he can continue his story for several lines of speech. He did not cede the floor when Tati unsuccessfully interrupted him while he was speaking on a topic in which he has more knowledge than Tati in line 239 (timestamp 8:50), maintaining the power gap between them.

It is also worth exploring how males react when females exercise this power move instead. One example is in a conversation between beauty influencer James Charles (coded JAM) who successfully interrupts Liza Koshy (coded LIZ), a comedy influencer, while she is speaking about YouTube’s shift: 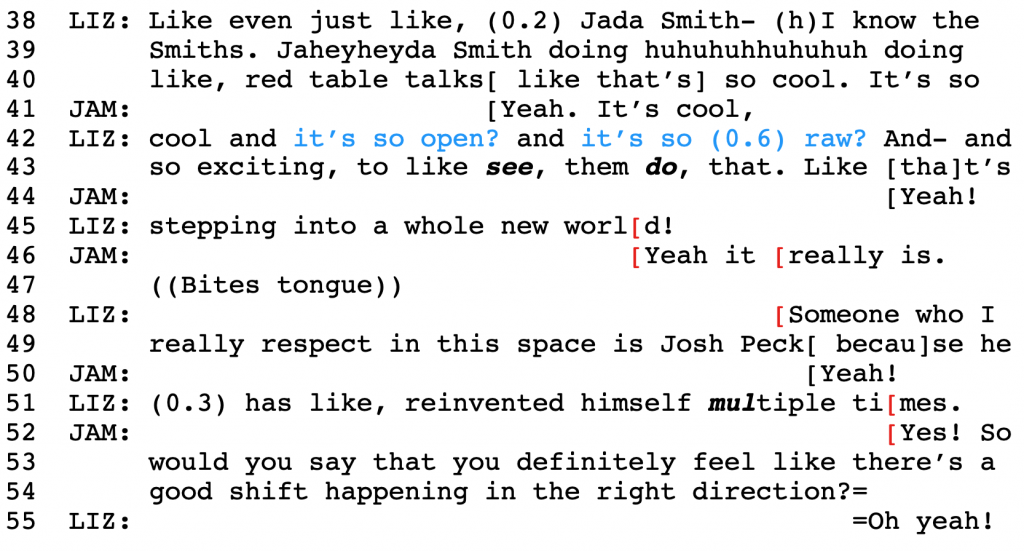 Liza reciprocated James’ successful interruption in line 47 (timestamp 15:45). In turn, James agrees with Liza in line 48, then successfully interrupts her in line 51 (timestamp 15:50) to take the floor again within five seconds. Furthermore, James’ expression changed at 15:45 from nonchalant to holding his tongue, when Liza successfully took the floor from him, designating her interruption as unnatural; subsequently, James presided over both the female and the conversation again. This case perpetuates the notion that male influencers are allowed to interject to establish dominance, whereas this would be inappropriate for female influencers.

James’ Expression Before and When Liza Successfully Interrupts Him 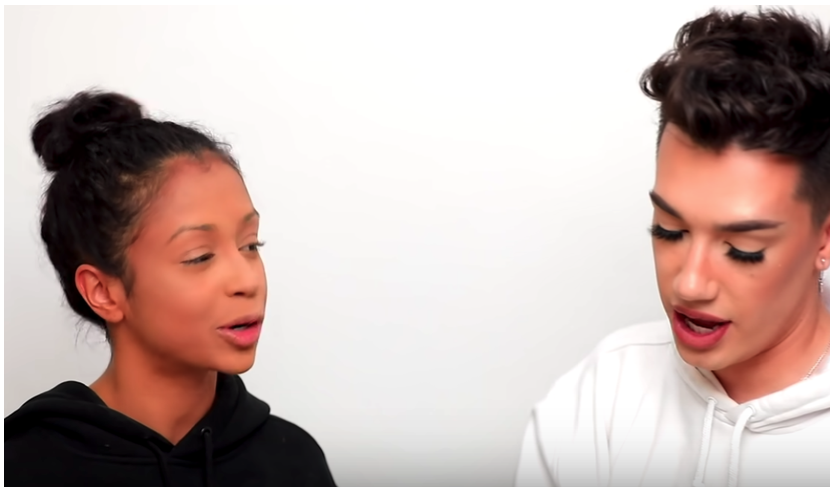 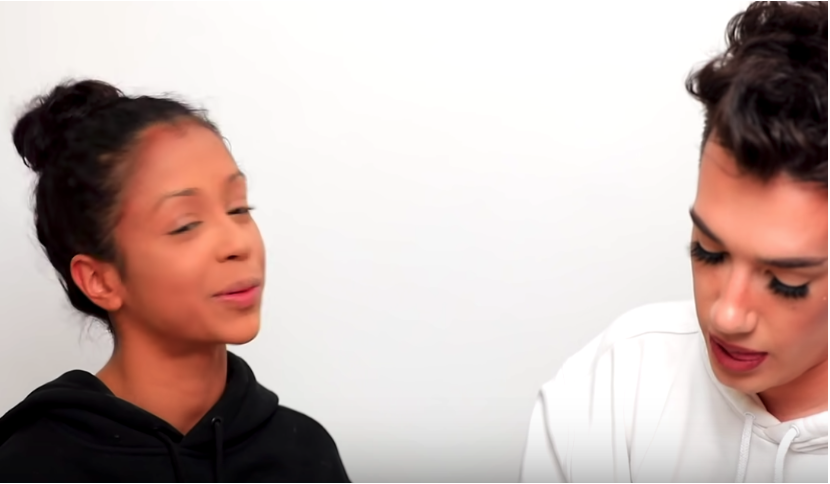 With regard to uptalk, female influencers tended to use this female-associated linguistic feature (Gorman, 1993) to maintain conversation by inviting addresses to add input, which was depicted in Liza and James’ conversation. In the following excerpt, Liza discusses how her outfit had been criticized:

Liza relied on pauses and slight intonation rises before using uptalk at the end of her statements, culminating in the addressee contributing. After Liza’s pause in line 184, she injected uptalk in lines 187 and 188, when explaining how criticism affected her. James interrupts after Liza’s uptalk in line 188 (timestamp 19:16), taking the floor to express prior knowledge in handling a similar situation. Liza’s uptalk signaled that entry points for interjections were available. Thus, Liza deferred speaker authority to James, allowing him to spearhead the conversation, thus highlighting unequal linguistic expectations bestowed upon each gender.

In lines 24-26, Kian held the foundation against his hand in conjunction with his rising intonation to elicit laughter. He did not mean to engage Bethany in conversation, since she did not chime in after his use of uptalk in lines 24 (timestamp 0:54) and 28 (timestamp 0:55), but stifled a laugh, indicating his actions as comical. Kian used uptalk again in line 28 (timestamp 0:55) to emphasize his lack of knowledge about the product – with Bethany still containing her laughter – then continues talking. Thus, the male influencer was unwilling to yield the speaker position after implementing uptalk, showing that he was not obligated to maintain conversation flow. 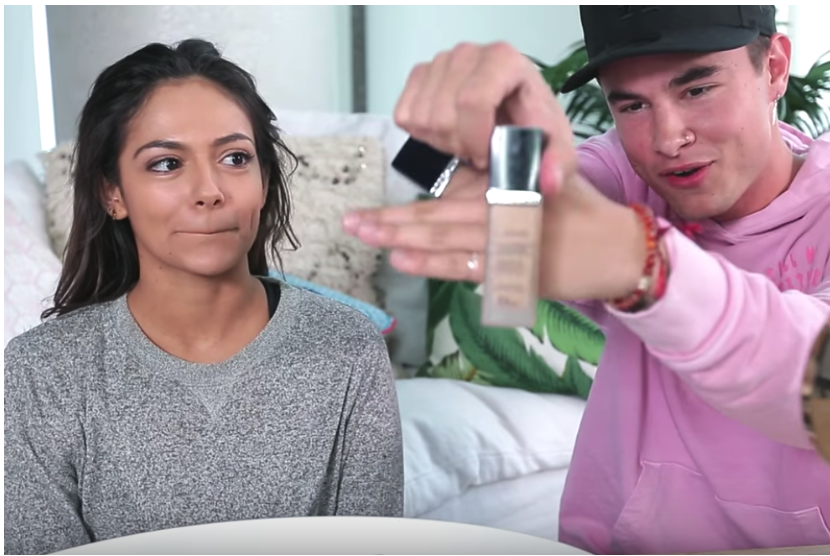 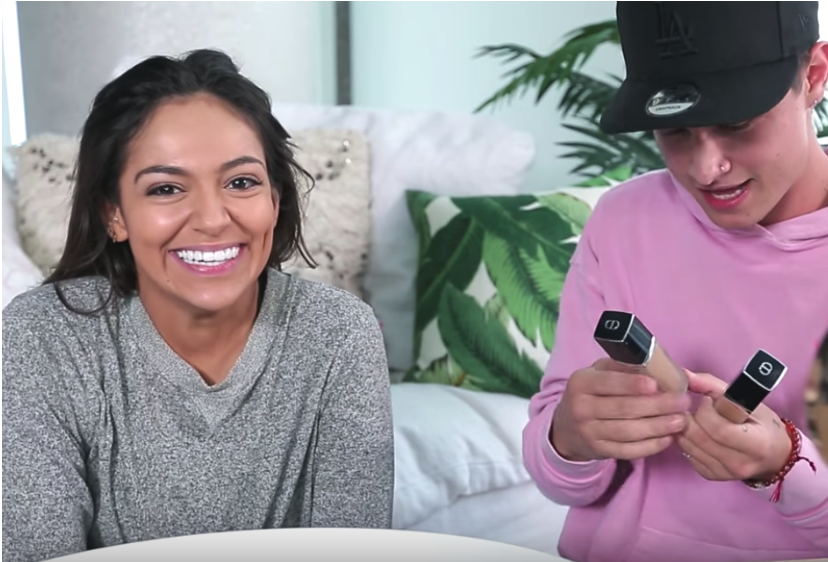 Overall, these linguistic features positioned female influencers to consolidate their gender identity by being polite through being successfully interrupted more often by males and of using uptalk to facilitate conversations. On the whole, the YouTubers studied have millions of subscribers and cater toward younger female audiences, which poses multiple problems. These include: the normalization of females being interrupted by males, establishing a power gradient, and of females taking on the role of facilitating conversations, organizing a gender asymmetry on YouTube. Ultimately, as YouTube rises in popularity, influencers’ speech may permeate non-YouTubers’ conversations, shaping the evolution of gender and language performances on a larger scale.

Griffiths, S. (2013, December 6). American men have started to talk like WOMEN: Californian  study finds that males are rising in pitch at the end of sentences. Daily Mail. Retrieved from https://www.dailymail.co.uk/sciencetech/article-2519363/Men-started-talk-like-WOMEN-Study-finds-males-rising-pitch-end-sentences.html