Election season is heating up,  and one of the most thrilling parts of the election is watching candidates go at each other during their debates. Whether the argument is over healthcare, gun control, immigration and so forth, there’s something about watching the most educated and successful politicians in America call each other idiots and try to talk over each other that I find very entertaining. There are always certain points of debates, during large disagreements or differences in opinion where the candidates start ignoring the moderator and going at each other. During these periods of crosstalk, there can be extensive interruption, which is surprising in this relatively structured conversation. These interruptions could be interpreted as a display of power dynamics at play, which is especially important between candidates of different genders. How does the gender of a candidate influence their role in these power-establishing interruptions in conversation? By qualitatively and quantitatively analyzing the interruptions in the Democratic National Committee’s debates, a better understanding of how the gender of a candidate influences their ability to express power in an election may be better understood.

We’re in the midst of election season, and extensive debates between candidates constitute this component of our politics. Candidates come on stage to share their opinions, spread their ideas, and also to minimize their opponents and show that they are deserving of the party’s nomination. Like any conversation, gender influences the discourse in these debates, as one could easily argue that American politics are a man’s world, and thus the female candidates have to fight for their place on the stage. Looking at the role of gender in this form of political discourse could help us understand how gender influences elections, debates, and the power dynamic in politics as a whole.

The study done on the ongoing democratic debates was two-fold, consisting of both a qualitative and quantitative analysis. The entire 2 hour debate from July 30th, between 7 male and 3 female candidates was analyzed and all instances of interruption, including the gender of the candidate who interrupted and the gender of the candidate who was interrupted were recorded. In addition, transcription on the 22-minute segment of the debate regarding healthcare was also executed. Transcriptions will help understand how the structure imposed by the Democratic National Committee for turn-taking is disturbed through linguistic features other than interruption.

For the purposes of this study, an interruption will be marked by a candidate speaking over, and successfully pausing the speech of another candidate, and interruptions of the moderator, silent interruptions, and non-intrusive interruptions will not be considered.

The quantitative analysis of interruption during a debate was conducted on the first night of the second 2019 Democratic Debate, seen below. 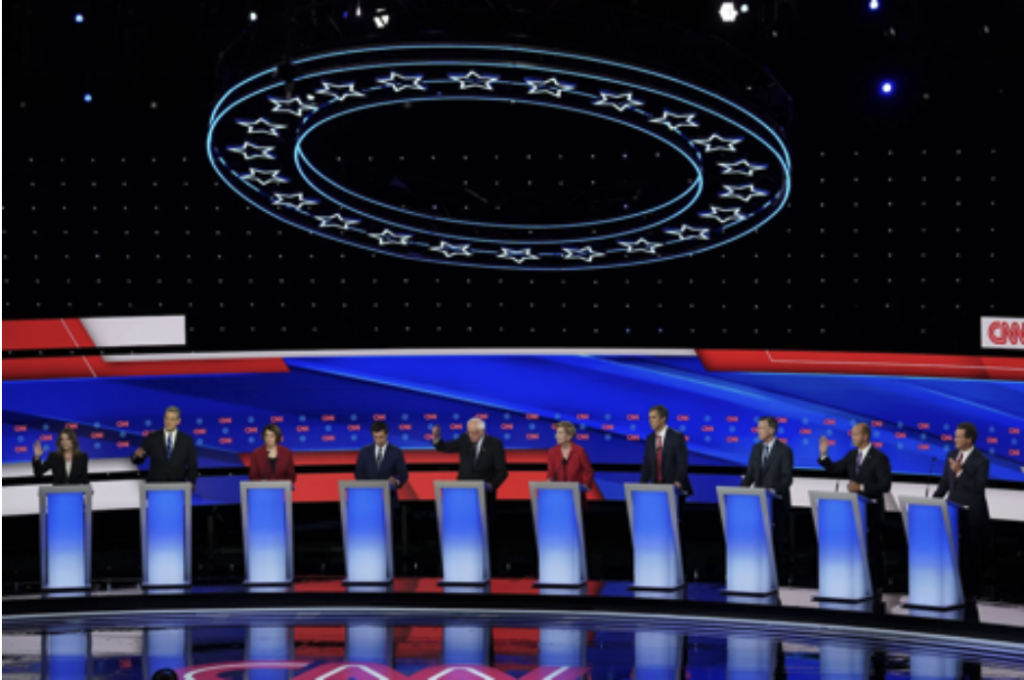 Throughout the debate, there were 24 occurrences of interruption, which are further broken down into four groups in the following tables.

It is important to normalize these results, so that our understanding of interruption is not skewed by the imbalance in gender seen in this realm of politics.  Claims such as males interrupt more during debates, or males speak more during debates are not necessarily false, but prevalence of males and females in the conversation must be considered. To determine if females are responsible for fewer interruptions due to a characteristic of their gendered language, or simply because there are less women present at the stage during the debate, a comparison of the origin and execution of the interruptions can be done. Further detailed analysis of the marked occurrences of interruption can help explain the nature of the conversation in a more qualitative manner. 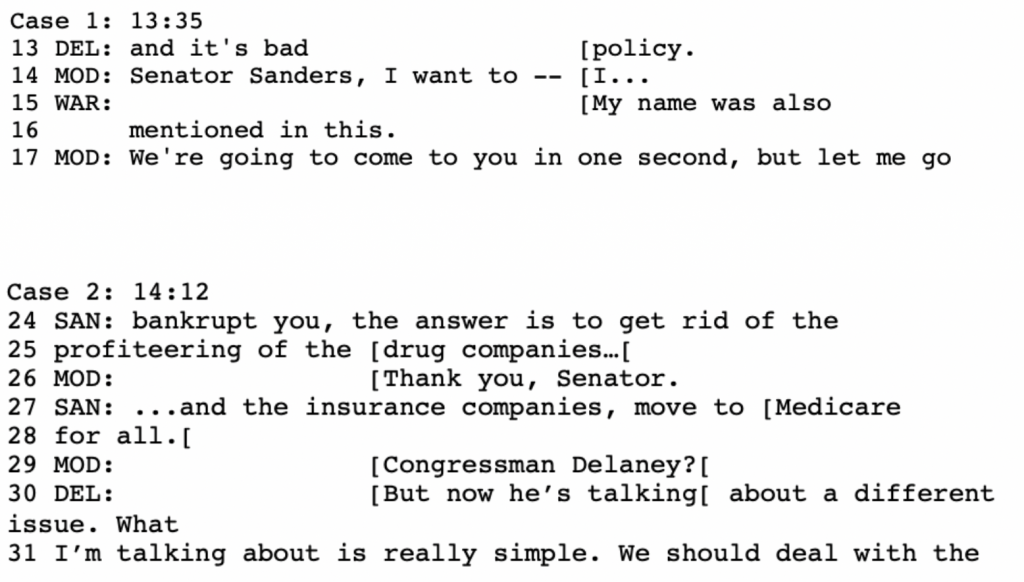 In the first interruption, of a male candidate by a female candidate, she interjects to inform the speaker that she should get an opportunity to speak, as in accordance with the rules after one is name-checked in question response.

In the interruption by a male candidate, there are many differences. The interrupted, Delaney, takes this opportunity to address the audience regarding the flaws in Sanders’ opinion by saying “But now he’s talking.” This interruption is not confrontational, but rather argumentative in nature.

While both these intrusive interruptions, regardless of propagator, are similar in the way they impact the conversation, there are differences in why and how they are executed.

In this study, the frequency of interruption between male and female candidates was not drastically different, yet when qualitatively analyzing the nature of the interruptions it was apparent that gendered differences did exist. While the results of this study are informative about the power dynamics between different genders in politics, this study is quite possibly limited to the field.

It could be argued that women in politics may be a deviant case from a woman in other fields, as they have to use dominance-establishing discourse in the form of interruptions to assert their position in a debate. No one would doubt that a male candidate belongs in a debate for a presidential nomination due to his gender, but a female candidate would have to prove her belonging in that scenario.

Interruptions can help establish dominance or an imbalance of power, but when utilized by a population that historically has not held power on the platform of presidential debates, can result in a gendered view of this language. The repeated interruption by Senator Warren during the debate analyzed is just one example of this. Successive interruptions by Warren could be in an attempt to express equality in this playing field by asserting dominance in a conversation, but also indicate an acquittal from gender roles and thus are additionally marked. Her dominance is therefore interpreted as “pushiness” or “nastiness” in the political realm, as illustrated below9. 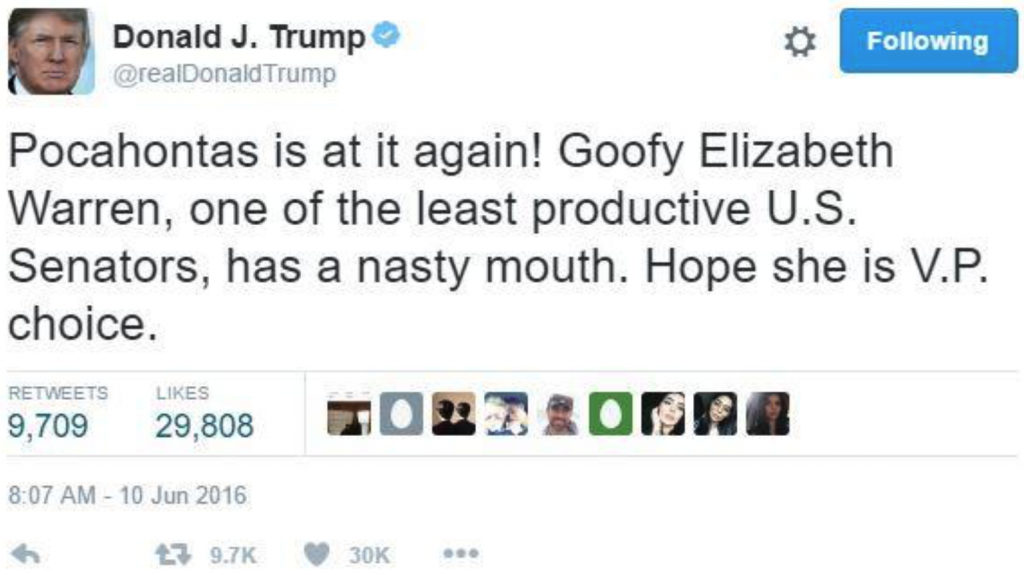 The gendered expectation is that women should behave and speak differently from men, and when this is contrasted, can lead to disruption of the hierarchy discussed in Tannen’s theory.7

While not many conclusions regarding how the frequency of interruptions influence the power dynamic in democratic presidential debates can be reached from this study, the understanding that a power imbalance can exist is quite evident. It is not only the frequency of interruptions but also their execution and response that influences who can assert dominance in these conversations.

Who’s Running for President in 2020? The New York Times.