Walt Disney movies are notorious for highlighting the differences between genders and promoting certain gender standards. Since these movies target children, they can have an impact on how children view themselves and others. This study will focus on investigating whether the classic Disney movie Beauty and the Beast, includes a culture of gender differences by using forms of so-called women’s language. To do so, mix-gender conversations from the movie will be analyzed on whether they contain polite forms, hedges, and interruptions, the rate in which these are used and the amount of time spent talking in a conversation by each gender will be compared. It was concluded that some aspects of women’s language are present in Beauty and the Beast which signify that gender differences are being promoted to children. This suggest that film makers should be more attentive on how gender if depicted to children as it can instate stereotypes on how women and men should communicate with each other. 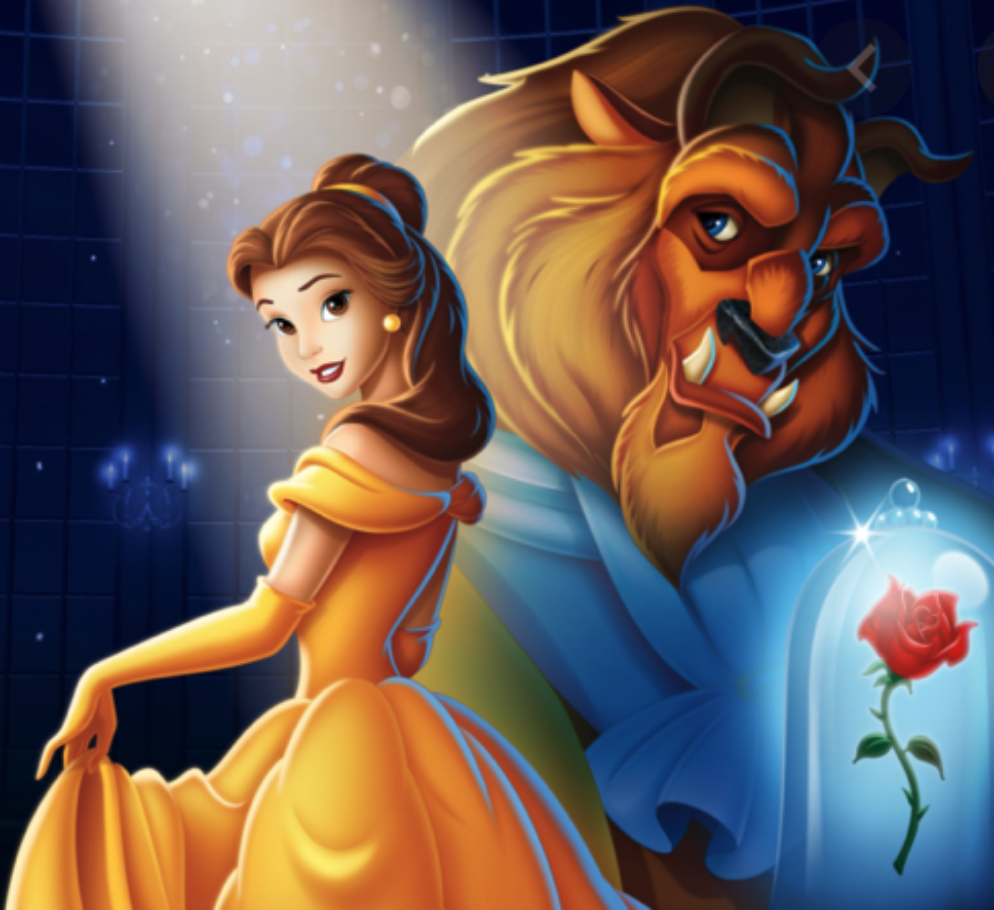 Walt Disney movies play a crucial role in the lives of some children. They provide a source of entertainment while promoting life lessons. However, Disney movies are notorious for highlighting differences between genders and promoting certain gender standards. Although most recently, new Disney movies have tried to depart from upholding gender standards and differences, the classic Disney movies still uphold these differences and have an immense influence in our culture. It is important to analyze how gender is depicted in Disney movies as their targeted audience are children from the age of four to the age of twelve. During this age, children are developing gender comprehension and watching gendered movies can contribute to the establishment of gender differentiating attitudes and the stereotypes they develop. This study will focus on investigating whether the classic Disney movie, Beauty and the Beast, includes a culture of gender differences by using forms of “women’s language”, the use of tag questions, avoidance of interruptions, use of hedges and use of super-polite forms (Lakoff, 1973). 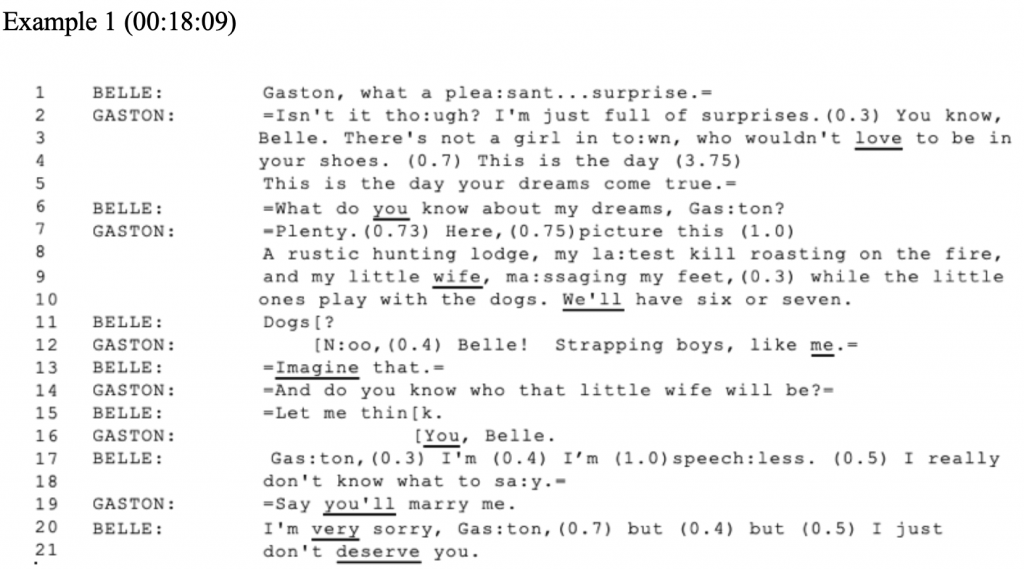 In the lines before 17 and 18, Gaston is discussing the life he pictures with Belle which lead to her using hedges to avoid saying that she will not like that life.  Belle also uses politeness to avoid Gaston feeling abruptly rejected which helps prevent a conflict between them. In the first line, Belle uses the word pleasant to be polite even though she did not believe it was a good surprise for Gaston to be at her house. She then uses to polite phrases, line 20 and 21, to reject Gaston’s offer of marriage. The polite forms used impact the conversation as they further exchange between Belle and Gaston where she must explain the reason she is rejecting his offer.

In this conversation, Gaston interrupts Belle twice. The first interruption occurs in line 12 when Belle suggest something that is far from what he was trying to say in his previous remarks. This deep interruption helps create a perception in which Belle is seen as unintelligent as she needs to be corrected even before she finishes talking. The second interruption occurs in line 16 when Gaston abruptly mentions that Belle is the little wife he has been talking about. These interruptions had an impact of on the conversation as it suggests Gaston frustration with Belle because she is trying to avoid his references and ultimately his marriage proposal.

Belle and the Beast

The first conversation between Belle and the Beast occurred after Belle traded places with her father. In this scene, the beast is walking Belle to the room in the castle she will be living in:

Towards the end of the conversation, there is a switch in politeness from the Beast. In line 12, he politely talks to Belle about how his servants will attend her if she needs anything. However, in the middle of line 13, he begins to demand Belle to join him for dinner. By not including polite forms, such as please, the Beast further demonstrates his power over Belle since he does not have to ask politely to get something he wants.

Number of Hedges: Hedges were present in conversation 1,2, and 5, and were used by the female character. This can demonstrate a woman’s insecurity in the conversation. For example, a hedge is able to lessen the remark of a statement which can indicate that the person using this feature does not feel confident enough to engage in an argument.

Based on this study’s findings, it can be concluded that some aspects of women’s language is present in the mix-gender conversations in Beauty and the Beast. Throughout the film Belle’s rhetoric was submissive towards both Gaston and the Beast. She only spoke in a certain manner while being careful not to interrupt them or offend them in any way. Furthermore, the Beast and Gaston constantly interrupted Belle while she was speaking. This creates a visual picture of women being inferior to men. The findings suggest that movie creators should pay more attention on how they are presenting gender to children as it can install stereotypes on how women and men should communicate with each other. Beauty and the Beast is a movie that is viewed by all different ages; however, being an animated film is caters towards children. Children often learn and copy what they see, and this helps reinforce inequality between males and females. Rather than teaching children that men and women can act and speak in the same manner, it teaches them that there is a specific way women should speak, and that is acceptable for men to interrupt women.

Rubinstein, E. (1978). Television and the Young Viewer: The pervasive social influence of television on children is being increasingly documented, but has yet to be translated into a continuing and effective social policy. American Scientist, 66(6), 685-693. Retrieved February 25, 2020, from www.jstor.org/stable/27848957