Commonly heard stereotypes regarding men’s strength is not only applicable physically but also linguistically. For instance, the idea that men are more powerful than women created this stereotype that men typically interrupt more frequently than women in a conversation due to male dominance (Eckert & McConnell-Ginet, 2013, p. 95). Though gender and interruption have been the focus of multiple types of research in the past, the results have been inconsistent as one study proves that the difference in the number of interruptions used in a conversation amongst both genders is insignificant (James & Clarke, 1993), while the other proves otherwise.

Besides proving whether or not this theory is applicable in all situations, I will also take a closer look beyond the frequency of interruptions between both genders. Since interruption is thought to occur unconsciously, I will see whether avoiding eye contact can be characterized as a gendered action while doing deep interruptions. Thus, I am going to test whether this stereotype of men dominating a discussion occurs in the community of New York chefs from the Bon Appetit Test Kitchen. Through this experiment, it is hoped that people could be more aware of each gender’s behavior in different types of interaction and eventually diminish the use of stereotypes regarding male dominance.

Interruption is described by O’Canaill and Frohlich (1995) as “a synchronous interaction which was not initiated by the subject, was unscheduled and resulted in the recipient discontinuing their current activity” (p. 262). In this study, I decided to focus on the use of deep interruptions, which disrupts the flow of the conversation and ultimately changes the topic of the discussion. According to Lakoff (1975), the idea of male dominance signifies a more hierarchical status that men hold, throwing women under their dominance, even linguistically. Since the male dominance model has been affecting the performance of women’s speech negatively, I conducted this test to prove whether or not this objective applies to my subject of study and whether the difference is significant. In addition, the role of eye contact in human interaction is crucial for the delivery of information from one another (Russon, Bard & Parker, 1998). Therefore, I would like to see if deep interruptions would affect the absence of eye gaze depending on who and to whom it is applied to.

After gathering all of the data and quantifying the number of deep interruptions that arises in each interaction, I have found the average number of incidents in both cross-sex and same-sex interactions

Looking at the table above, it is obvious that men from the Bon Appetit Test Kitchen successfully interrupt more in a mixed-sex conversation, where the difference is twice as much as the women’s behavior. However, using R Programming, I discovered that the p-value for this particular situation (0.1276) is larger than 0.05, which means the difference between the use of deep interruptions in a mixed-sex conversation between men and women from this sample data is not significant. Likewise, this insignificance also occurs in any other combination of gender and type of interruption of the Bon Appetit Test Kitchen Members.

Successful interruptions that occur in this particular setting are oftentimes denoted by a pattern of eye contact avoidance between the speakers prior to or while interruption takes time. Below is one of the examples that can be found in cross-sex interaction between Brad and Priya regarding the steps of making home-made yogurt. 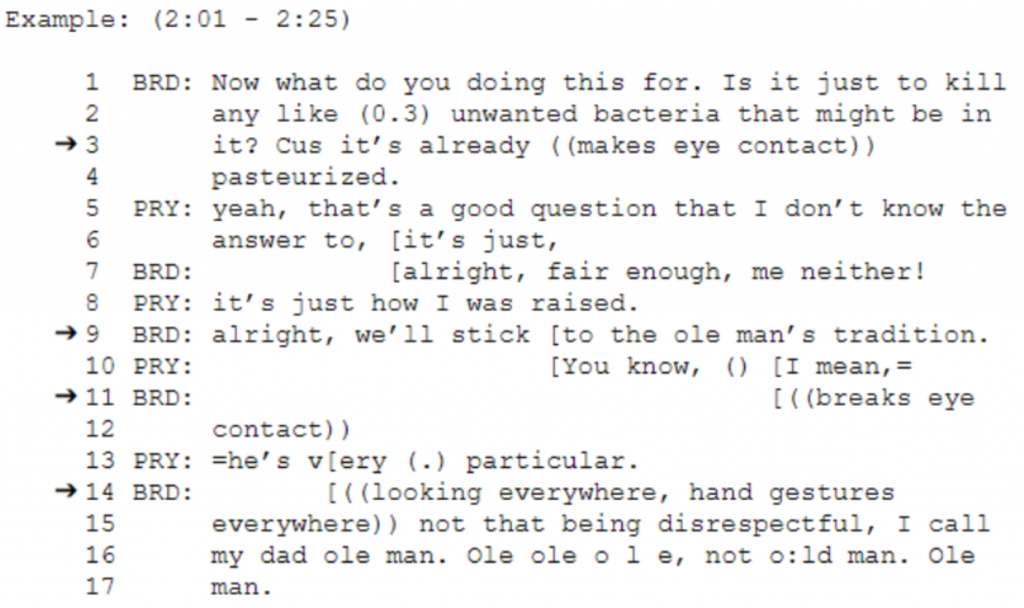 From the example above, a successful interruption occurs at line 14 when Brad is justifying his use of the term ole man. Being worried that people misheard him for calling Priya’s dad an old man, he cuts Priya off with his explanation without making any eye contact. This absence of eye contact allows him to share his opinions without getting interrupted. A similar situation also arises prior to the successful interruption, which occurs in lines 1 through 4. While Brad is asking a question to Priya, their eyes do not meet and this, too, enables Brad to talk at a longer period of time without being cut off by Priya.

To give a better insight related to the evidence shown above, I have observed the mean percentage of eye contact avoidance in each type of interruption.

After thorough analysis, I have found that there is no power dominance in the community of Bon Appetit Test Kitchen in which one gender successfully interrupts more than the other while conversing. Perhaps due to time development, there has been a lot of positive improvements towards the approach that society provides to women, thus refining the way women construct their speech. Moreover, in regard to the pattern of avoiding eye contact while successfully interrupting, I found that there are patterns in which this action is not merely a subconscious gesture. Just like the example shown in the results section, the absence of eye contact gives the speaker the ability to talk in a longer period of time without any interruption. Other than that, in other observations, I found that speakers tend to break eye contact while deep interrupting the other person to shift his/her focus to the object that is being discussed. Finally, for the members of Bon Appetit Test Kitchen alone, considering they make videos to be uploaded to YouTube, they often successfully interrupt the other to engage more with the audience by looking straight to the camera.