With the sudden increase in Asian representation in American media, more light has been shed on Asian culture and common stereotypes are slowly being dismissed. Nuances of Asian culture, specifically the Asian American experience have yet to be explored. Delving into such an experience reveals a historical portrayal of Asian men as often being weak and effeminate. Asian American men are subject to sociocultural expectations of gender roles dictated by a tradition of patriarchy. Masculinity, for many Asian American men is externally defined, and the strength of a male’s connection to his Asian American heritage may be indicative of the pressure he experiences to conform to such cultural expectations. This study examines male-male interactions involving Asian American men to look at how aggressive displays may inform the pressure caused by the desire to conform to sociocultural expectations that such men often experience. A transcription analysis was performed on recorded conversations between Asian American male friends during a competitive board game setting, to determine the frequency and type of both interruptions and profanity, and level of speaking volume during the interactions. Although there seems to be no direct relationship between an Asian American male’s perceived connectedness to his cultural identity and level of aggressiveness in his language use, this may indicate the likelihood of other contributing factors such as the desire for him to preserve in-group norms. 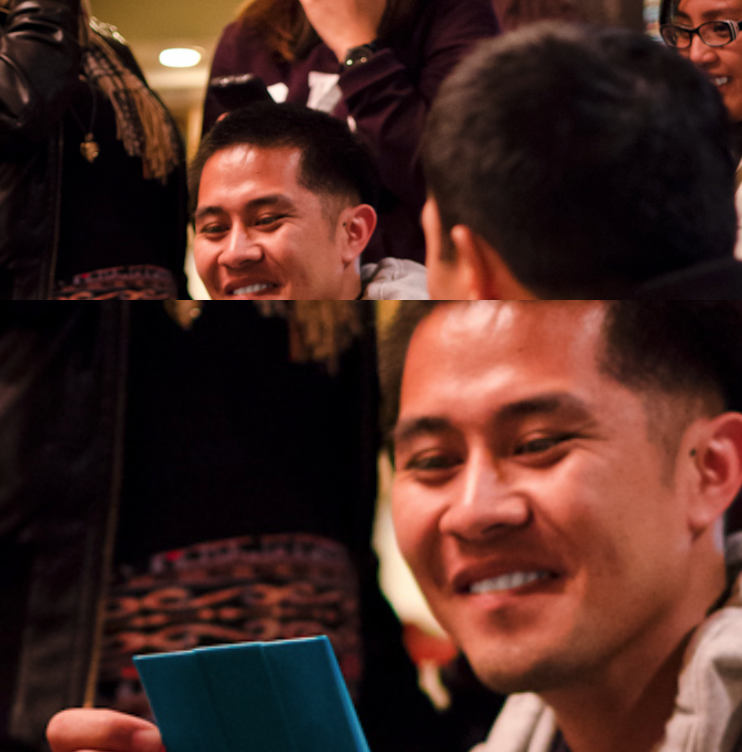 One context in which gender roles and masculinity often play a significant role is dyadic interactions. Although much research has been done on mixed-sex interactions, research on same-sex interactions, specifically focusing Asian American males, is lacking. The current literature on same-sex interactions between Asian American males involves studies on father-son relationships, but there has not been extensive research on how the degree to which a male identifies with his Asian heritage affects his use of language. Looking at the linguistic units of profanity, interruptions, and speaking volume, this study explores how an Asian American male’s perceived connectedness to his cultural identity manifests itself in the form of aggressive behavior through language. By doing so, this study posits that within a competitive game setting, aggressive displays such as speaking at a higher volume and using both more profanity and non-supportive interruptions at a greater frequency during male-male interactions, are indices of sociocultural expectations that Asian American males who are strongly connected to their heritage might feel pressured to conform to. While this correlation may exist in certain settings such as in a competitive game setting, this hyper masculine behavior may, instead, be a product of a male’s relational proximity or perceived closeness to his audience, or a way for a him to demonstrate camaraderie by maintaining in-group norms.

Participants included four Asian American males and one, non-Asian male who were all part of the same friend group. All of the participants were college students, also known as emerging adults, with ages ranging from 18 to 22 years. Likewise, homosexual males were excluded from this study because sexual orientation was a potential confounding variable. Participation in this study was voluntary.

Data collection involved collecting audio recordings of participants playing the competitive board game, Taboo, where partners were tasked with describing and guessing words. In each round, the non-Asian friend was tasked with being the guesser while the describer would rotate amongst the Asian American friends until all had participated. At the end of the rounds, the Asian American participants were asked to complete an exit survey to be kept and used for later analysis. The recordings were then compiled and analyzed for each pairing using an online software, and then subsequently transcribed for further analysis.

This study focused specifically on the linguistic features of interruption, profanity, and volume as units for analysis. In the study, interruptions were defined as either cooperative/supportive or competitive/non-supportive. Cooperative interruptions, as described in Yang (1996) involves interruptions that are more supportive of a speaker’s hold of the floor and serve to draw focus on the speaker’s claims or statement. Likewise, Yang (1996) characterizes competitive interruptions as interruptions that attempt to take the floor away from a main speaker when another speaker feels that their ideas are more valuable. Additionally, profanity was categorized as mild, medium, or strong, with mild profanity being words that one could use in everyday conversations without much offense or words that are acceptable on nationally broadcasted media, strong profanity being words that most individuals would not use in a school setting without some sort of disciplinary consequence, and medium falling roughly between the two. Lastly, volume in this study was differentiated into categories of normal, loud, and soft. Normal volume was defined as a speaking volume appropriate in a café, soft volume was defined as the speaking volume appropriate in a library, and loud volume was defined as the speaking volume appropriate in a noisy environment. The data collected was comprised of both qualitative and quantitative data. In four different conversations, the frequency of interruptions, profanity, and speaking volume were recorded to assess displays of aggression. The results on interruptions and profanity were further stratified, with interruptions separated between the categories of supportive and non-supportive, and profanity separated between strong, medium, and mild. These results were then compared with results from the exit survey on the participants’ perceived level of connectedness with their Asian heritage to determine if there was a correlation between each of the two variables. A 5 on the survey would indicate a strong connection to a one’s Asian heritage and a 1 on the survey would indicate little to no connection to one’s Asian heritage.

As indicated in Figure 1, there is no clear difference between the overall use of profanity between males with varying levels of connectedness to his Asian heritage. The average use of profanity in each of the four scenarios was around 3.5 times per the 1.5-minute span of the conversation. However, when stratifying the data to differentiate between the 3 levels of profanity: strong, medium, and mild (Figure 2), there is a clear contrast between each of the participants. Excluding the outlier DAN, it seems like there is a positive correlation between the variables of strong profanity use and perceived connectedness to one’s Asian heritage.

Examining the results from the surveys and recordings, there were discrepancies between an Asian American male’s perceived connectedness to his own culture and his expected display of aggression through language during male-male interactions. In some instances, it seemed as if the degree to which a male identified with his Asian heritage was a strong predictor of his displays of aggression. However, this correlation was not applicable to every scenario in the study. What is important to note is that all of the conversations occurred within the parameters of a competitive game amongst a group of friends. As such, regardless of the degree to which an Asian American male identifies with his heritage, this does not mean that this is an identity that is static or present in every situation. The in-group solidarity that Kiesling (1998) calls “camaraderie” could ultimately be the underlying/confounding factor that could also inform the observed results. By constructing their identity within the constraints of heteronormative masculinity, males are pressured to perform in a way that expresses or exerts dominance with others. Yet amongst other males, this shared experience is what ultimately fosters community relationships, something that may have played a role in each of the conversations.

There were several limitations to this study. One of these limitations involved sample size, which was quite small for this study. Likewise, although having a non-Asian male assume the position of a guesser for each round did control for the variable of familiarity to the describer, it may have been more conducive to have participants play multiple rounds of Taboo and then take the average of the results. Additionally, although the study did define the various operational variables, it would have been better if they were defined quantitatively as opposed to qualitatively. Future studies could possibly benefit from taking a look at the effect of racial identity of a partner in a conversational dyad on the level of aggression displayed in language used by Asian American men.

The main takeaway of this study was that, although there seems to be somewhat of a positive correlation between an Asian American male’s feelings of connectedness to his culture and the level of aggression he displays in his language, this does not hold true for all Asian American males. There are likely a multitude of factors which could possibly contribute to such an observation, one of which could be due to the desire for such males to maintain in-group norms by performing hyper masculine acts such as displaying aggressive behavior.

How Men Talk (an opinion piece on Medium)

Male Friendships Are Just Bullying (a YouTube episode by CollegeHumor)