When we think of K-Dramas, we can easily think of the Cinderella story: a poor heroine meets an extremely rich hero and becomes a modern princess. A famous screenwriter named Eunsook Kim always fascinates numerous viewers by entertainingly telling this kind of story. When I looked into her most famous works, Lovers in Paris (2004) and Goblin (2016), I discovered that the speech patterns of heroines have changed over time even though the setting of the Cinderella story remains the same. I analyzed dialogues from two dramas, and the analysis showed that a heroine from recent drama Goblin speaks in a more dominant way than a heroine from the older drama Lovers in Pairs. It shows that Kim reflects the change in women’s speech behavior in her script. This reflection is very important because it is a mirror of the time which demonstrate the change in women’s speech behavior in the real world.

Different social roles for males and females create different essential ways of thinking, and eventually, they lead to the difference in pronunciation, sentence constructions, and many other linguistic components. According to Lakoff (2004), the speech patterns of men are naturally more dominant than women. Based on women’s usage of tag questions to get confirmation and assurance by male’s opinion, he argues that women are subordinate to men during the conversation. On top of the theory of Lakoff, Men and women are expected to use a different style of language in Korean culture. For instance, because of the influence of patriarchal culture, females use more polite language than males, but the expectation towards femininity underlies behind it.

However, by comparing two different K-Dramas, Lovers in Paris (2004) and Goblin (2016), I observed that a heroine Euntak from the Goblin has dominant speech style just like men while a heroine Taeyoung from the Lovers in Paris still uses the traditional subordinate speech style of women. This is important because the change of speech patterns of two heroines may reflects women from the real world also use the dominant speech style in today’s society and the differences between men and women’s speech behavior may reduced in these days.

To demonstrate that the differences between dominant speech style of men and subordinate speech style of women are now reduced in these days, I compared and contrasted dialogues of Taeyoung from Lovers in Paris (2004) and Euntak from Goblin (2016). They are in a similar situation where they both had to depend on extremely wealthy heroes, so it is very interesting to see the difference in their speech behavior.

By comparing two dialogues, I realized that Taeyoung tends to be interrupted by the hero during a conversation, while Euntak tends to interrupt the hero more. According to Sohn (2006), interruptions and overlappings can be a signal of power since they are primarily viewed as impolite behavior and “powerful people are more likely to feel warranted to interrupt powerless people than vice versa.” In the dialogue from episode 2 of Lovers in Paris, Giju, the rich hero in this drama, comes to Taeyoung’s house as a surprise after they meet at the bar by coincidence (Korean in bold italics): 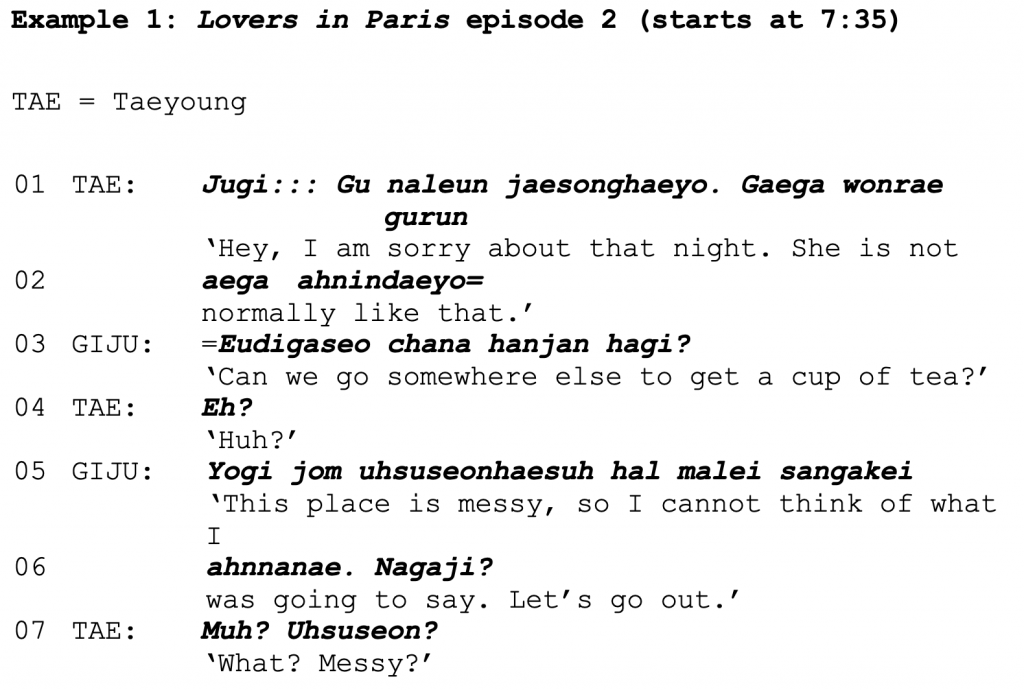 In this dialogue, they do not communicate with each other, but just says what they want to say. In this unilateral conversation, Giju simply conveys what he wants to do and does not pay attention to what Taeyoung says as he interrupts while she is still talking at line 2. He is very dominant and leads the whole situation by almost demanding her to head out for a cafe. Meanwhile, Taeyoung is completely and helplessly led by Giju in the conversation as Giju keeps brings up what she did not expect at all. Lines 3 and 5, she reacts by saying, “Huh?” and “What?”, which shows that she is very surprised by what Giju brings up and the only thing that she can do is reacting to it. Although Giju interrupts her and even tries to take her outside her house, she never interrupts him and asks what he is going to talk about nor try to continue what she was going to say.

However, if we look into the dialogue of Angel of Death and Euntak in Goblin, we can observe that the heroine Euntak is not subordinate to the male character like Taeyoung in Lovers in Paris. In this conversation, Euntak meets the Angel of Death while she is with the Goblin, the rich hero in this drama. Euntak is scared of the Angel because she thinks that the angel came to take her to the afterlife.’ 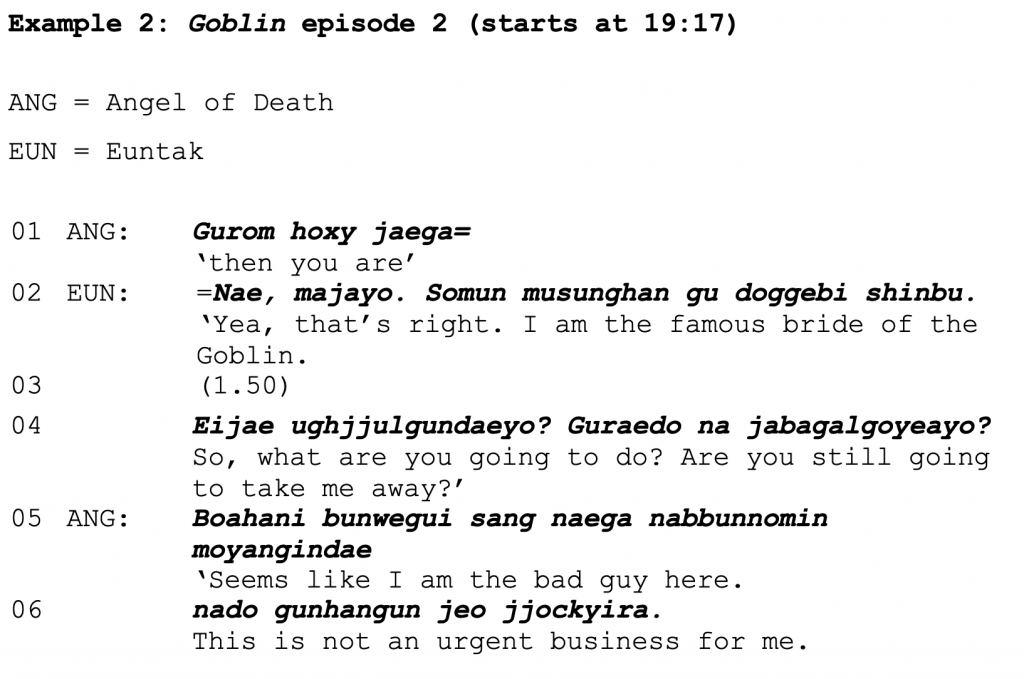 In this dialogue, Euntak interrupts the angel and leads the conversation by asking back to him at line 4. Even in the situation where her life is threatened, she bravely stands against the angel. Although she was with the Goblin, she did not depend on him. According to Sohn (2006), women tend to avoid interruptions and overlapping. In other words, Euntak’s speech style is dominant just like traditional men.

Through comparing two dialogues, we found an interesting change in the usage of interruptions by heroines, which shows that Eunsook Kim made a change in the speech behavior of heroines; they used to have the subordinate speech style, but they now use more dominant speech style. In the script, she may reflect that women’s speech behavior has changed over time. Whether her dramas are a mirror of the time or viewers get influenced by her drama, it is worth looking back at our speech behavior and think about which speech style we want to use for our daily conversation.