On November 14, 2019, Alex Karev surprises Grey’s Anatomy fans with his last appearance after 14 years on the show! Karev was an exceptional surgical resident along with his star peer and friend, Meredith Grey. This blog explores and analyzes the linguistic nature of interpretations made by these two surgical residents, which include features like differences in gender, power, reputation, etc. It specifically focuses on whether the interpretations were carried out based on the dominance model, where males naturally dominate over their counterparts, or on a power dynamic, where professional and/or social standing matters.

Continue to read the following blog to learn more about how our findings can shed some light on how this impacts social interactions!

According to Parsons (1964), male and female have often been viewed as two clearly defined and opposite identities and their separate roles maintain a sense of balance in society. This belief leads to the dominance model which states that the differences observed in women and men’s speech are established because of male’s natural dominance over women. As a result the dominance model persists to keep women subordinate to men (Penelope, 1990).

To learn more about the dominance model as well as Robin Lakoff’s Women language theory, check out this YouTube Video!

Interruptions is the focus of this blog analysis because this linguistic feature can reveal a lot about where the speaker is coming from in terms of his social behaviors and norms that he is influenced by. Interruptions often serve as a way to take over from the initial speaker’s point by asserting the interrupter’s own statements. For the purposes of this research, interruptions were defined as a statement, comment, or recommendation made by subject two during subject one’s statement, comment, or recommendation to undermine subject one’s thoughts and/or take the floor from subject one.

It is a common belief that men carry out interruptions more than women and women get interrupted more than men; however, previous studies have shown interruptions between men and women may be more related to a power dynamic rather than gender. For instance an article by James and Clarke (1993) state that there were not any significant genders patterns during interpretations.

Interruptions can also be a result of a power dynamic or hierarchy that is set in place. It is less of a social deviance for one who possesses a superior standing due to position determined by society, finances, education, seniority, and/or profession to carry out more interruptions. Lastly interruptions may be the result of a combination of those two or other factors.

Check out this app that counts how many times men interrupt women!

This blog specifically analyzed these linguistic features in the popular American medical drama television series, Grey’s Anatomy, which started in 2005 and is still airing today! The series focuses on the journey of surgical interns into surgical residents at Seattle Grace Hospital in Seattle, Washington. The two characters analyzed were Alex Karev and Meredith Grey. The purpose of this study was to observe whether scripted media showed the dominance model, a power dynamic, or a combination of both or other factors by specifically analyzing the interruptions made by surgical residents of different genders.

Through analyzing conversations in one Grey’s Anatomy episode, the results showed that the male surgical resident interrupted primarily because of his professional status, which he closely identified with. He only interrupted his subordinates but never his superiors or bosses, which reinforces the hospital’s professional hierarchy. The female surgical resident on the other hand mainly interrupted her superiors but only when she had an advantage over her recipient. This was to preserve her professional standing and her socially perceived character.

The methods for this study involved a conversation-analytic (CA) approach, which is a fancy term for analyzing conversations. This blog analyzed conversations between superiors/subordinates and the two focused characters to describe how the interruptions occur. I transcribed the excerpt of conversations that involve interruptions by Karev and Grey in an episode from season four.

Season four narrates the daily lives and struggles of the main characters as they embark on their journey as first year residents. As residents they now are responsible for teaching their own interns, but also have to report to their superiors who include the attending, fellows, and chief of surgery. I analyzed the context in which the interruptions took place (i.e. in surgery, in the ICU, outside the hospital, etc) and with whom (i.e. their subordinates, superiors, or colleagues). I also focused on the means in which the interruptions were carried out such as with the uses of pauses, increase in volume, politeness, etc.

The first example is from season four episode five of Grey’s Anatomy which narrates the characters first day as new residents. The following transcript is a conversation between first year resident Meredith Grey and her neurosurgeon attending boyfriend, and therefore her superior, Derek Shepherd. 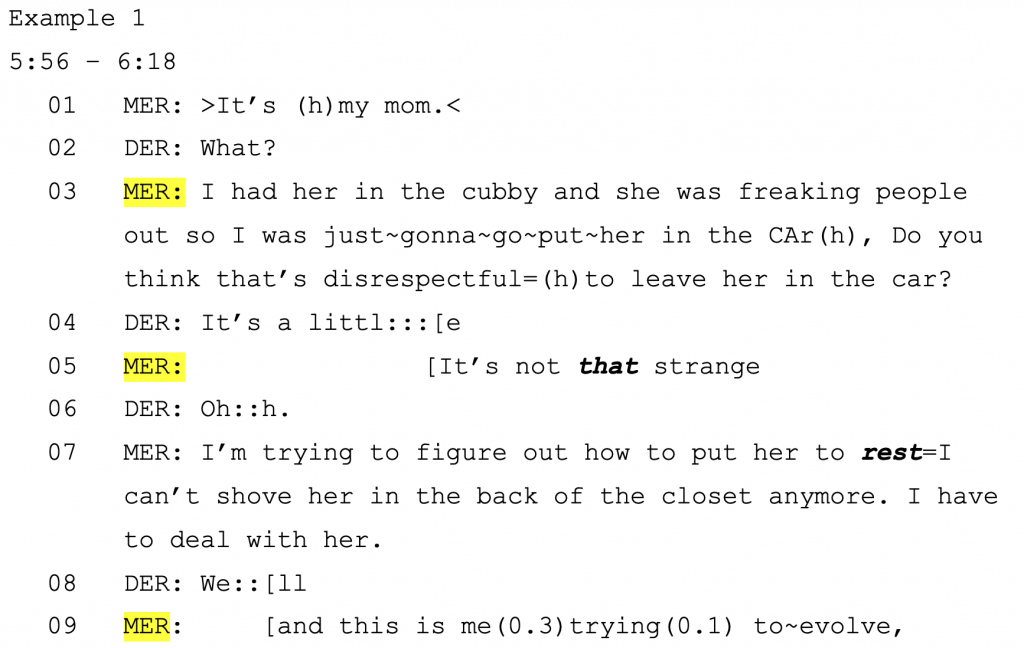 The first interruption by Grey took place in line five and it is accompanied by an emphasis on the word “that.” The emphasis on “that” along with her rapid speech in line three displays her attempt to share her thoughts and justify her behavior of carrying her mother’s ashes, which Shepherd perceives as abnormal, as conveyed through the lengthening of his word in line four.

Her need to justify this action can be explained by how women define their status. According to Eckert and McConnell-Ginet (2013), men justify and define their status based on their accomplishments, possessions, or institutional position while women justify and define theirs on the basis of their overall character. Grey may perceive the action of carrying her mother’s ashes around as a threat to her character which could affect how the people around her view her. As a result this could negatively affect a potential advancement in her career professionally and/or socially. Therefore in an effort to preserve not only her professional image but also her personal character, she quickly interrupts her superior before he could make any comments that may negatively impact her reputation.

This conclusion is further supported when Grey interrupts a second time as seen in line nine. Shepherd was about to share his thoughts on Grey’s behavior in line eight when she interrupted in line nine by saying that her behavior is highlighting her efforts to evolve, most likely in her character. This comment is significant because it shows her pursuit to evolve as a person and therefore improve her image which validates the odd behavior of carrying around her mother’s ashes in the hospital. In other words, Grey interrupts as a mean to save face and to be perceived highly in the workplace even if the person she is interrupting is her boss.

The following example is another instance of an interruption; however it displays a conversation between first year resident Alex Karev and his intern Norman Shale whom Karev is responsible for teaching and getting acquainted to the work flow of the hospital.

The increased volume when stating the number of hours in surgery and emphasis on key words, both seen in line one, highlights Karev’s assertiveness and power over his intern as he lectures him. After a short pause, Shale tries to clarify his symptoms. However Karev pays no attention to his statement when he gets distracted by another patient and interrupts him in line three by further directing his intern to do something else.

The display of power as seen in the raised voice and the short lecture from Karev to Shale places Karev as professionally dominant over Shale. The professionally hierarchy is already established by the culture and protocol of hospitals, however Karev uses that structure as a means to interrupt and disregard Shale’s comment even though Karev’s responsibility is towards caring for Shale and his education.

In addition, the lecture in line one shows how proudly Karev identifies with his profession as a surgeon, which further exemplifies Eckert and McConnell-Ginet (2013) argument that a man finds is personal worth mainly in goods, status, and power in the marketplace. Using increased volume and emphasizing key words, he states the amount of hours a surgeon stands in surgery without food or breaks as defining characteristics and strengths of a surgeon and therefore deserves awe and respect. From this example Karev carries out interruptions with his subordinates as a result of his pride in his profession along with his power from his professional status. This is significant because it reflects where men may extract their credibility to exert their dominance through interruptions.

A final example from season four episode five is a conversation between Grey and the general chief of surgery, Richard Webber, where Grey asks for approval for a pro bono surgery for a young boy without the external structure of an ear in his office. 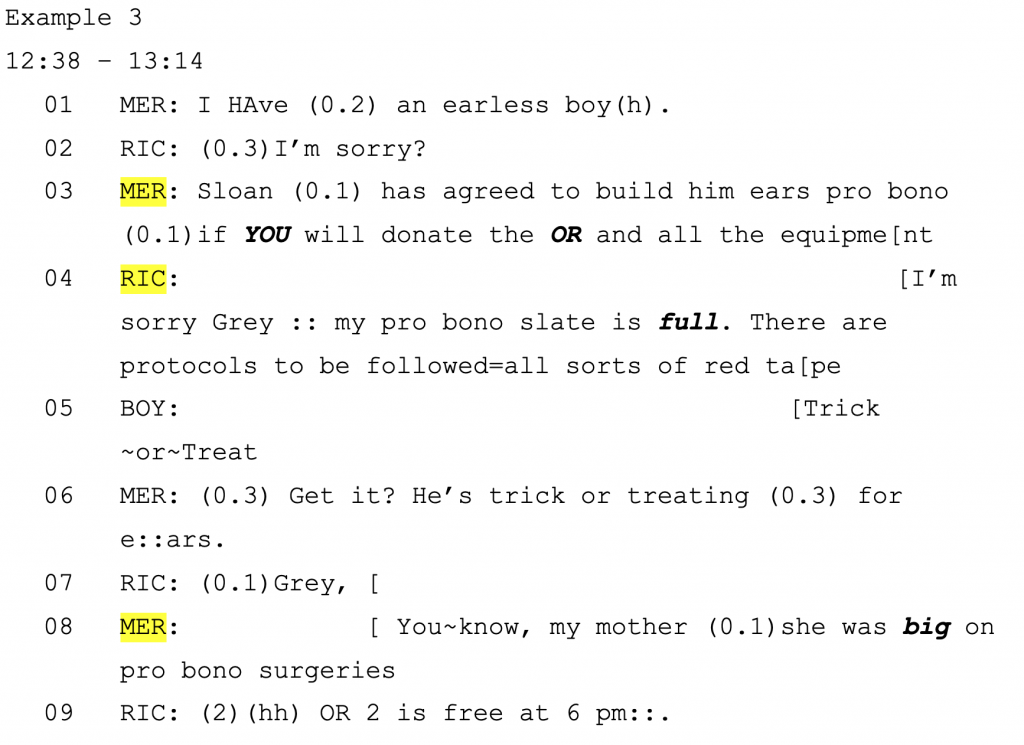 The norm of society concerning interruptions is that superiors have an acceptable right to interrupt their subordinates. However the excerpt shows Grey interrupting the chief of surgery who is her superior, therefore deeming this example as a deviant, or out of the ordinary, case. She carries this out in linguistic manners by pausing before key words that may evoke an emotional response from Webber, as seen in line one where there is a pause before “earless boy.” She also brings into the conversation and emphasizes other superior figures, Sloan an attending plastic surgeon in line three, with a pause. The introduction of another superior and male figure into the conversation who also agrees with Grey’s course of action gives her request more credibility.

However her first attempt fails when Webber, in line four, interrupts Grey to logically explain why the pro bono surgery cannot take place. Grey counters with her own interruption as she mentions her mother followed by a pause in line eight, since Webber had a professional and romantic relationship with her mother. Since the first strategy of appealing to Webber’s emotions and referencing other male superiors was not a success, Grey approaches the situation differently by resorting to introducing her mother into the conversation.

This approach showcases that Grey will interrupt her superiors when she has an personal advantage over her recipient and their emotions rather than an advantage based on merit or her professional status as a surgeon. These interruptions by Grey are significant because it shows how female may need to resort to other methods of appeal rather than solely relaying on their own merits and authority for a successful appeal.

In the episode analyzed, Karev only interrupted his subordinate, such as his intern, but did not carry out interruptions with his superiors. The justification for his interruptions involved asserting his dominance and power through the predetermined professional hierarchy of the hospital. This was also further strengthened by his personal self worth and identity in his profession. Grey primarily interrupted her superiors, but only when she had an emotional advantage over her recipient to preserve and highlight positive aspects of her reputation.

Although there is not enough information to conclude that female surgical residents on the show are more concerned with saving face and the males are not or males closely identify with their dominant profession and females do not, the analysis does show that interruptions involve a variety of factors.

Despite the limitation that script media has on the extent to which the conclusions drawn from this show can be applied to real-life interactions, these conclusions are still significant because it reveals how the show producers and writers perceive the operations that take place in a hospital and how language highlights gender differences in the profession. It also displays what they define as social and behavioral norms in a medical setting and how that affects patient care and workplace relationships. This affects the viewers by playing a role in how they define and accept the social and behavioral norms they see on television and by possibly distorting their expectations what they to expect in a real-life hospital setting.

Tannen, Deborah. 1994. The relativity of linguistic strategies: rethinking power and solidarity in gender and dominance. In Gender and Discourse, ed. by Deborah Tannen, 19–52. Oxford University Press.