The central question I want to address in this blog is the impact that gender can have on the way politicians choose to express themselves in political debates and how gender can influence the type of interruption. Interruptions can range from being more destructive and face-threatening to being more supportive and polite. So what is a face-threatening act? A face threatening act threatens the face of the speaker or the hearer and may threaten what is called a positive or a negative face. Politicians on the debate stage commonly threaten the positive face of their opponents by negatively evaluating the hearer’s face through criticism and interruption.

According to Brown & Levinson, “face is threatened when individuals intrude on others to pursue their own goals, and even minor face threats can threaten the other’s chosen image and damage the relationship”. This can be seen on the debate stage as male politicians will threaten and criticize other candidates by employing face-threatening interruptions while female candidates are more likely to use supportive and non-threatening interruption as a result of the societal expectation that “women ought to communicate politely” (Rudman & Glick, 2001). Women utilize face threatening acts less often. This is because they are expected to communicate more politely by endorsing politeness speech strategies. As expressed in literature, “politeness enables people to make requests or express ideas and opinions without threatening the other’s face, which is one’s chosen image” (Goffman, 1967). Women are more likely to engage in this form of polite and non-threatening communication than men.

I am going to study the Democratic presidential debate held on February 19, 2020 in Las Vegas, Nevada. This is an interesting opportunity to study gender dynamics, and the effects gender can have on the types of interruptions politicians employ during a debate. To understand this, it is important to study the portions of the debate where there is a lot of discussion and conversation between candidates. In these moments, we see different kinds of interruptions take place: some threatening while others are more supportive. It is expected that the evidence will point towards the following: that when men interrupt others, they are more likely to do it in a face-threatening or rude manner so that they can criticize and threaten the image of their opponent while women are more likely to interrupt in ways that are supportive and less face-threatening (thus communicating politely). This can be applied in the context of debates as male candidates will likely interject and interrupt other candidates in order to either make a threatening comment or to defend against a face-threatening act in order to damage their opponents’ image and position themselves in a better light. Women, on the other hand, are less inclined to jump in with the same assertiveness for fear of being deemed too aggressive or threatening by the public (Pfafman, 2014). During the course of this Democratic presidential debate, candidates frequently interrupt and challenge one another on stage by employing different kinds of interruptions (either more threatening or more supportive)—specifically looking at how these types of interruptions are utilized by each gender and how often they are used.

In watching the Democratic Presidential Debate that was in Las Vegas on February 19th, 2020, I focused on portions of the debate where candidates entered into heated discussions and responses that resulted in a high frequency of interruptions. The portions studied were about 1-2 minutes in length and contained multiple interruptions of varying types. These interruptions span the range from face-threatening to supportive. I counted the number of interruptions of each type and kept track of who made them (whether the person was male or female). The following legend decodes the transcriptions below: 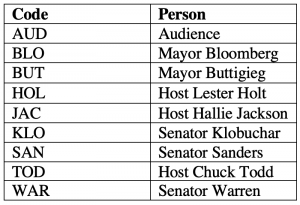 The following examples from the beginning of the debate depict interruptions between Buttigieg and Sanders that are considered to be face-threatening acts since they threaten the hearer’s positive face. In this example, Buttigieg is speaking about the campaign contributions he has received from his supporters and says the following:

This example of a face-threatening act is motivated by the desire to damage Sanders’s positive face and threaten his image. The interruption in line 11 comes as a response to this attack, so Sanders interrupts Buttigieg in order to defend himself and take back some control from Buttigieg. It is understood that communication style is shaped by many factors—one of the most important ones being gender (Pfafman, 2014). Thus, the relationship between the use of face-threatening acts and their frequency must at least in part be due to the differences in communication styles between the genders. Politeness strategies and politeness patterns differ based on gender: men are less likely to reduce the inherent harm of face-threatening acts while women are more likely to behave in ways that utilize politeness strategies in order to mitigate the harm of face-threatening acts (Ramadhani, 2014).

Interruptions may not always be face-threatening, sometimes interruptions can be more supportive. In this example, Warren attempts to interrupt Buttigieg in line 5:

In line 5, Warren interrupts Buttigieg but does so just as Buttigieg is wrapping up his response in line 4. This type of interruption is non-threatening as Warren is not attempting to criticize Buttigieg nor is she striving to defend herself; she is attempting only to insert her opinion in a moment when Buttigieg is done speaking. Her interruption was not disruptive, and it did not occur at a time in the conversation where it would have derailed the speaker’s train of thought. Therefore, it cannot be considered a deep interruption. The interruption also did not have any face-threatening qualities to it since there is no indication in line 5 that Warren was motivated to threaten Buttigieg’s image or attack him.  Since the interruption occurred right at the end of her opponent’s statement and was not meant to criticize; this interruption can be classified as non-face threatening because it does not threaten the speaker’s face or the hearer’s face. Women are challenged by the constructed notion that “they ought to communicate politely” (Rudman and Glick, 2001) so when female politicians interrupt others on the debate floor; it is less likely because they want to introduce criticism or threaten another individual and more likely because they want to “make requests or express ideas and opinions without threatening the other’s face” (Goffman, 1967). This is done so through the patterns of politeness that women are socially expected to present.

In this blog, I studied the types of interruptions in presidential debates and how gender plays a role in these interruptions. I was specifically studying whether the interruptions were more supportive or more face threatening. There is evidence that politeness does have an impact on how each gender employs different types of interruptions in language. It is found that women, since they more commonly utilize politeness patterns and strategies, are less likely to produce interruptions that threaten or attack another person’s positive face. This is because there are societal expectations and standards in western culture that favor polite women, and in these situations, women will attempt to mitigate and reduce the harmful effects of face-threatening acts by using these politeness strategies to appear less assertive. This becomes especially important on the debate stage where the perception of the candidate is important to maintain a certain public image. The genders have different communication styles that allow them to use language in different ways—meaning that the types of interruptions as well as how and why they are used in conversation are also gender dependent.

If you are interested in learning more about politeness theory or face-threatening acts in general, the following links to videos may be of interest:

A Coursera video on the notion of face (free course)